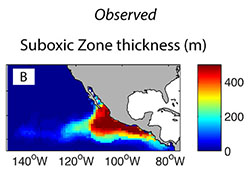 Contrary to conventional wisdom, new research indicates the eastern tropical northern Pacific's anoxic zone was shrinking for most of the 20th century before beginning to expand in about 1990. Because trade wind intensity is expected to diminish in coming decades owing to climate change, a result may well be the contraction of the ocean's largest anoxic zone. [Image: Adapted from Science]

A commonly held belief that global warming will diminish oxygen concentrations in the ocean looks like it may not be entirely true. According to new research published in Science magazine, just the opposite is likely the case in the northern Pacific Ocean, with its anoxic zone expected to shrink in coming decades because of climate change.

An international team of scientists came to that surprising conclusion after completing a detailed assessment of changes since 1850 in the eastern tropical northern Pacific's oxygen minimum zone (OMZ). An ocean layer beginning typically a few hundred to a thousand meters below the surface, an OMZ is by definition the zone with the lowest oxygen saturation in the water column. OMZs are a consequence of microbial respiration and can be hostile environments for marine life.

Using core samples of the seabed in three locations, the scientists measured the isotopic ratio of nitrogen-15 to nitrogen-14 in the organic matter therein; the ratio can be used to estimate the extent of anoxia in these OMZs. The core depth correlates with age, giving the team a picture of how the oxygen content varied over the time period.

From 1990 to 2010, the nitrogen isotope record indicates that oxygen content steadily decreased in the area, as expected. But before that, and particularly clearly from about 1950 to 1990, oceanic oxygen steadily increased, which, according to co-author Robert Thunell, a marine scientist at the University of South Carolina, runs counter to conventional wisdom.

"The prevailing thinking has been that as the oceans warm due to increasing atmospheric greenhouse gases, the oxygen content of the oceans should decline," Thunell says. "That's due to two very simple processes.

"One, as water becomes warmer, the solubility of oxygen decreases in it, so it can hold less oxygen. And two, as the surface of the ocean warms, its density decreases and the oceans become more stratified. When that happens, the surface waters that do have oxygen don't mix down into the deeper waters of the ocean."

But that just covers the supply side of oxygen in the ocean, Thunell says. Just as important is the oxygen demand, particularly for the degradation of sinking organic matter.

Phytoplankton grow in surface waters, and they are the primary producers of this organic matter. After they die, their detritus slowly sinks from the surface to the sea floor, and there is a layer in the water column, the OMZ, where microbes consume much of the detritus, a process that depletes oxygen through bacterial respiration.

The extent of oxygen deprivation in the OMZ largely reflects how much phytoplankton is being produced on the surface, Thunell says. Plenty of phytoplankton production at the surface means less oxygen underneath.

And that, the team thinks, is why the oxygen concentrations in the Pacific Ocean so clearly increased from 1950 to 1990. Phytoplankton production is enhanced by strong winds (because they cause upwelling of nutrients from deeper waters) and diminished by weaker winds, and the scientists found evidence that trade winds were weaker then.

Looking at two different measures of wind intensity (the East-West difference in sea level pressure and the depth of the thermocline) over the time periods involved, they conclude that trade winds were diminishing over the course of 1950 to 1990, but then picked up from 1990 to 2010.

They're not sure why wind strength increased around 1990, but think it may be related to the Pacific Decadal Oscillation. "A lot of people are familiar with ENSO, or El Nino, which is a kind of interannual climate variability," Thunell says. "The Pacific Decadal Oscillation is analogous to a super-ENSO, but one that's varying on decadal time scales."

Over the course of coming decades, though, trade wind speed is expected to decrease from global warming, Thunell says, and the result will be less phytoplankton production at the surface and less oxygen utilization at depth, causing a concomitant increase in the ocean's oxygen content.

"That has some important implications for fisheries," he says. "One of the issues over the past 20 to 30 years is that oxygen has been declining and these oxygen minimum zones have been expanding, which could have a negative impact on fisheries.

"But if the last 20 to 30 years are not the norm because of these unusually strong trade winds, then there won't necessarily be that impact on the fisheries. If the trend reverses, and we go back to weaker trade winds — as people predict will happen because of the warming oceans — then the decrease in oxygen in the oceans that we've been seeing may be reversed."

It's a matter of both supply and demand.