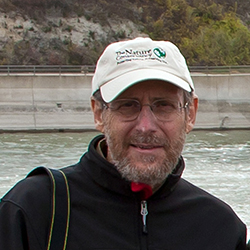 Emeritus professor Will Graf got started in research by studying the riparian forests of the Colorado River in the 1970s. Since then, he has been all over the map — in the best sense of the phrase — developing the experience to bring a broad understanding of river systems to resource questions nationwide.

When a river runs through it, there will be opinions aplenty on how to manage that river. And as emeritus geography professor Will Graf knows, science has a lot to offer when competing interests are entrenched in positions that might seem impossible to reconcile.

Take the Savannah River. South Carolina and Georgia are engaged in a contentious dispute about the proposed dredging of the harbor in the coastal Georgia city of Savannah. Although the potential for economic impact routinely makes headlines, there is more to the dredging issue that that.

"The Savannah is one of the largest sources of freshwater flowing from the United States into the Atlantic Ocean, and for that reason, it's important for sturgeon populations, among other fishes," says Graf. "Many people are very much concerned that if the harbor is dredged an additional five feet to a depth of 45 feet in order to accommodate the new transport ships that are coming through the Panama Canal, this will result in a loss of sturgeon habitat, and in particular spawning grounds for the sturgeon."

Atlantic sturgeon could well be dubbed the American buffalo of the sea. Plentiful in waters up and down the U.S. coast when Europeans arrived, the now-scarce species landed on National Oceanic and Atmospheric Administration's Fisheries Service endangered species list two years ago.

So deepening the harbor would wipe out a foothold for an endangered species, making dredging and wildlife conservation mutually exclusive pursuits in the area, right? As it turns out, if you know what you're doing, you can have your cake and eat it, too.

Scientists have made a convincing case that the waters downstream can accommodate sturgeon and sea freighter simultaneously if the water releases from the J. Strom Thurmond dam, more than 100 miles upriver, are adjusted. An intervening dam may also be bypassed by changing the river-channel location.

"If it's done properly, it will be possible to create a sturgeon habitat not in the harbor, but in the river itself further upstream," says Graf. "So you have the advantage of a natural river habitat, and you also have your ability to develop the harbor."

The water releases from dams that improve conditions for wildlife downstream are called environmental flows, or e-flows, and can be worked into a larger plan to accommodate many interests, from recreation to hydroelectric power generation, Graf says. As chair of the Environmental Advisory Board for the Army Corps of Engineers last year, he oversaw the drafting of a document to guide the Corps in incorporating e-flows in river projects nationwide, including the Savannah.

The insight needed to put together successful e-flow plans is the result of decades of research by scientists like Graf. Since the early 1970s, he has studied the riparian forests — that is, forests adjoining rivers — of the Colorado River.

Once established as a specialist and one of the world's foremost experts on that river, he moved on to study other western river systems with a more general approach, from the Rio Grande to the Klamath to the Platte and waterways in between. He came to the University of South Carolina in 2001 in part to familiarize himself with river systems on the Eastern seaboard, and he has never regretted the decision.

"It's been the experience of a lifetime," he says. "Great people to work with, faculty and administration, a great platform to work from, and just an hour by plane from D.C."

The proximity to the nation's capital has helped him bring the best science available to policymakers who need it. Working with teams to develop recommendations is crucial, he says, for arriving at the best solution to resource management quandaries.

Young specialists in specific areas, such as the Savannah River system or hydroelectric power generation or flood management, benefit from the years of experience and broader approach that a generalist brings to the table. That's particularly important with river management, Graf says, because of the abundance of competing interests that come with the territory.

"I know that politicians like to say that there are win-win situations, but if that's true, finding solutions for water management resource problems would be easy," Graf says. "It's not true, there are always winners and losers, and the question is how to distribute the wins and losses in a way that's acceptable to the greatest number of people. And that's where the science comes in.

"A scientist can say, 'If you make a certain decision, then the following things are likely to happen.' I don't think I've ever seen a situation, and the Savannah's a good example, where a scientist has stood up in a meeting and said, 'This is the right thing to do.' The right thing to do is a political choice, and that's a decision made by all of us."