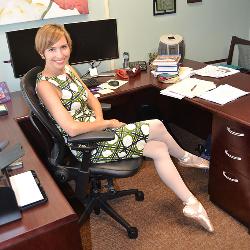 Dancing en pointe is a big leap that most dancers take around 12 years old, but Amanda Fairchild did it in her 30s.

"I was so giddy when I finally put on the pair that would be mine," recalls Amanda Fairchild. "I will always remember that moment because it was the culmination of so many things."

Being fitted for pointe shoes is a rite of passage, a big step for ballerinas. It's a leap most dancers take around the age of 12. Fairchild, a professor of quantitative psychology at the University of South Carolina, did it at 32.

Fairchild, who studied classical piano for several years and minored in sculpture in college, has always had a creative side; but until recently, her interest in ballet had remained an unfulfilled childhood dream.

However, when the stress of starting her career after graduate school started to wear her down several years ago, her mother suggested she find an outlet for her creative energy. Fairchild's mind went immediately back to ballet, though starting in her 30s proved even harder than she thought. "I was starting from scratch — from zero really," says Fairchild who describes her previous dance experience as a handful of school dances at best. Beginner adult classes are not only hard to come by, but those that exist tend to be a combination of stretching, some dancing and very little technical development.

Frustrated and seeking to move beyond the basics, she enlisted Mindy Chester, an instructor at the USC Dance Conservatory, to give her private lessons. "Mindy is an incredible teacher," Fairchild says. "She single-handedly got me to a place where I could enroll in the conservatory and work more intensively. Before I met Mindy, I couldn't pat my head and rub my stomach at the same time. That's how uncoordinated I was."

After a semester, Fairchild registered for her first real ballet class. "It was kind of comical," she says with a grin. "Think about it: a leotard-clad adult woman, trying to master tendu among a group of prepubescent 10-year-olds. I often wondered what the parents thought as they observed the class."

Awkward situations aside, she quickly realized that ballet added balance to her life.

"I'm a bit high strung and anxious," Fairchild confesses. "Ballet shuts my mind off and brings me peace. When I'm dancing I turn off work; there isn't a stray thought about deadlines, grades or research projects."

After much hard work — "Ballet is a continual honing of skills and quest for perfection," she says — Fairchild realized part of her dream last spring when she performed in the conservatory's production of "Hansel and Gretel," dancing the role of the wicked stepmother. The significance of finally doing something she had wanted to do her whole life, though, hit her long before opening night.

"I was standing at the barre for support, and I remember the glee I felt as I went en pointe for the first time. It was a joyous moment," she says. "I'm more emotional about that day than I am about the day I earned my Ph.D. I can't imagine my life now without ballet."