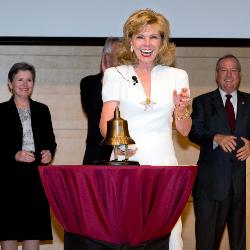 With the ringing of a bell, Darla Moore officially opened the new building bearing her name and ushered in a new era for the university's business school. Moore told the audience at the grand opening event that the building represents her expectations for the school's future: excellence.

“This building is extraordinary,” Moore said, “not only in its architectural splendor, but also in the LEED platinum status that we are on track to get. That’s an amazing achievement.”

About 600 invited guests joined Moore, architect Rafael Vinoly, University of South Carolina President Harris Pastides and other dignitaries at the grand opening on Sept. 12. The building is noted, not just for its appearance, but for its sustainable design, including using upper floors to shade lower floors; taking advantage of natural lighting; and having a green roof that captures rainwater, which is in turn recycled for various uses.

During the event, Moore thanked people who were instrumental in getting the building completed, including her husband, Richard Rainwater, who was unable to attend, but who was listening in to the event.

“Boops, if you’re hearing this, we thank you from the bottom of our hearts for what you’ve done to help us achieve this vision today,” Moore said. “You’re the greatest teacher I ever had, and I deeply appreciate you and love you for that.”

“This building sends a clear message to all – students, parents, business leaders – that the Darla Moore School of Business is striving to be its best and there are no limits to our ability or capacity to expand the frontiers of knowledge.”

Moore recounted how her involvement with the business school began about 15 years ago.

“Hootie Johnson and Hugh McCall – two men who are dear friends of mine – asked to meet with Richard and me. And we both thought the meeting was about some sort of business investment that they wanted us to make,” she said. “We were surprised when the request came in for a major contribution to the USC School of Business.

“Obviously, they made a compelling argument because we agreed on the spot. Now, the reality is, they just asked and we just said yes; they didn’t have any great arguments.”

One key to the donation, Moore said, was having the school named for a successful businesswoman.

“It was a singular opportunity to send a powerful message, that women could pursue successful business careers at the very highest levels,” Moore said. “That’s a powerful, powerful statement.

“My second thought was about the life lesson imprinted by my chosen career: You can continue to do the things like everyone else does or you can do them better.

“My expectation for this institution and all of its endeavors and in all of its accomplishments is excellence. ... In the global competition we face today, this standard will ensure that the students passing through these halls will have the opportunity to build a successful career.”

Moore said it is now up to her and university and state leaders to rise to the challenge to help the school meet that expectation.

“While appending my name to this spectacular facility is important to its standing, possibly, it is the quality of thought and the quality of product and the ideal of excellence on which the reputation of the Darla Moore School of Business will rest.”

Later, Moore rang the opening bell – as is the custom to open daily stock trading on Wall Street – and declared the Darla Moore School of Business officially open for business.

To find out how you can help support the Darla Moore School of Business, visit Carolina's Promise.