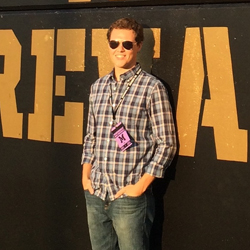 The Daily Gamecock's sports editor Danny Garrison knows sports. UofSC asked him five questions on football and ESPN's College GameDay to see what he had to say about his favorite team.

If you could trade places with any Gamecocks football player who would it be and why?

I would probably trade places with Patrick Fish. He's got that sweet hair and his role on the team is primarily as the coordinator of fun shenanigans. He's also the holder for field goals, but I could get that figured out in due time.

Would you rather be Mic Man, Cocky, a cheerleader or Spurrier and why?

I'd rather be the Mic Man because of the fame and glory and the awesome wardrobe options. I definitely wouldn't want to do Spurrier's job. That's way too much stress, and I don't think I have the ability to take that many subtle jabs at so many people.

What's your number one piece of advice for people who are going to College GameDay?

I would advise anyone who's going to College GameDay to develop at least two to three rough drafts of their signs before taking them to the printer. You want to have that one sign that everyone's tweeting about Saturday morning, so you can't go about this recklessly. No "Maty Mauk wears jorts." No "Gary Pinkel listens to Nickelback." You're better than that.

I don't know how many people notice it, but when the team breaks the huddle at midfield during pregame warm-ups, offensive line coach Shawn Elliott and the linemen have this giant fake brawl. They all just get really pumped and run into each other. That's pretty awesome.

What player do you think will surprise fans during this weekend's game against Missouri?

I think we could see a little more David Williams this week. He's a redshirt freshman running back, and he scored the first touchdown of his career last weekend, so maybe he'll get some more playing time in between Mike Davis and Brandon Wilds handoffs.