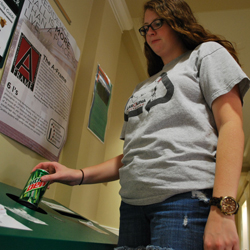 Go green for the Gamecocks

Football season to most University of South Carolina students means tailgating, face decals and cheering on their favorite players. Senior public relations and environmental studies student Haley Rabic has something else on her mind during the games, though, and she hopes more students will start to as well.

Rabic is thinking about the environment.

"Sports are one of the least sustainable events in the community," Rabic says. "But it easily can become greener. People don't realize how easy it is to go green in their everyday lives."

A Green Quad resident mentor for the second year, Rabic says UofSC has come a long way in "going green," but many students are still unaware of the ways they can stay sustainable during football season.

Each season, volunteers and students with Sustainable Carolina hand out trash bags in tailgating lots at the South Carolina State Fairgrounds, encouraging attendees to throw away, and even better, recycle their cans, cups and other items instead of throwing them on the ground.

Along with this pre-game preparation, this year the Green Quad has begun a "green tailgate" located within the fairgrounds. Headed by faculty and staff of the Green Quad and Sustainable Carolina, the new tailgate includes healthy foods with vegan and gluten-free options, places to recycle and the possibility of solar-powered chargers for phones and other devices in the future. The Green Quad is the only residence hall to run its own tailgate.

"Not only is this a good opportunity for students in the Green Quad," Rabic says, "but for a lot of first-year students who aren't sure where to go before the game and want to make some new friends."

For those tailgating outside this environmentally friendly area, especially those outside the fairgrounds, Rabic said there are a lot of easy ways to keep game day easy and green:

• bring lots of trash bags to throw away plates, cans, bottles and cups

• look for recycling bins in the fairgrounds as well as in the stadium to dispose of cans, bottles and paper goods

• if there are no recycling bins around you while tailgating, separate recyclables and bring them home to be recycled properly

• use compostable paper plates when tailgating. They aren't much more expensive then regular paper plates and break down easier in the environment.

Rabic adds that one of the most important parts to staying green on game day is being aware. That means spreading the word about recycling bins, trash bags and opportunities like the green tailgate.

"If students know that things like this are available, they're more likely to act on it," she said.

Realistically, Rabic said she knows a large school like UofSC will likely not see a completely green game day, but she's hopeful for the future and is proud of the individual and group efforts made so far.