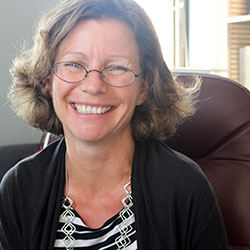 In the nearly 70 years since the end of World War II, German guilt and shame over the Holocaust remains — though some modern German literature reflects a more casual attitude toward the stereotyping of Jews.

That’s what Agnes Mueller uncovers in her latest book, “The Inability to Love: Jews, Gender, and America in Recent German Literature,” to be released in late summer by Northwestern University Press.

Mueller, a professor in languages, literatures and cultures, reviewed popular German literature since the 1990s to gain an insight into the personal views of younger, post-war German writers. What she found isn’t a popular topic in her home country, but sheds light on today’s generation of Germans and their feelings about their country’s checkered past regarding Jews.

“So many years after the end of WWII and after generations have acknowledged German guilt over the Holocaust, you have these young writers who write novels that still contain stereotypical references to Jews, that still bring up some of the mixed feelings that I think a lot of Germans still have, without really acknowledging it,” Mueller said. “Below the surface of a culture that prides itself on having dealt with the Holocaust, you see that in a more personal space there is a lot resentment and a lot of unworked through emotions.”

Mueller found that newer generations of authors, who don’t have as much personal experience with German Jews because of that population’s depleted numbers, tend to include more stereotyping of Jews in their writing.

“Presumably that’s when you would have the most worked through and unproblematic treatment of the subject,” she said. “The first generation [after the war] was still deeply involved with rejecting guilt, so there were still a lot of obvious problematic emotions. My generation and younger tend to still be grappling with the same issues.”

Mueller’s research uncovered many texts containing offensive representations of Jewish women as promiscuous and of Jewish men as weak and effeminate, she said.

“People acknowledge that there’s injustice and they try to address it,” she said. “And even after generations of trying to do that, they still can’t. The larger lesson we need to learn from this is that we need to look at what is beneath the surface.

“We see memorials and we see nations putting on ceremonies or making statements, yet the personal space is still often infiltrated with remnants from what it was that led to the problem in the first place. I think that’s something that happens all over.”

Mueller's book will be released in November. It is available online through Northwestern University Press.