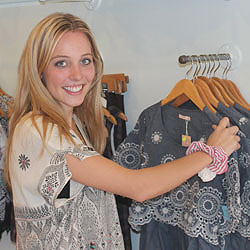 Experiential learning is all the rage in higher education, and Karley Vehaun has taken the concept to what might be its highest possible level.

A fashion merchandising major in the College of Hospitality, Retail and Sport Management, Vehaun recently purchased a fashion boutique in Five Points from her former boss and is about to reopen it under a new name with her own handpicked line of clothing.

"I always wanted to work in a boutique, so when I found out that USC had this major, I totally wanted to study that," says Vehaun, who plans to complete her University of South Carolina degree in December 2015. "Then I landed a job in the same boutique where my sister worked — and now I own it!"

Vehaun started working at Julia Neal Fashions on Saluda Avenue not long after she came to Carolina, and over time assumed progressively more responsibility for the store's operation.

When Julia Neal, a Carolina fashion merchandising alumna, decided to focus on her other boutiques, she encouraged Vehaun to buy the business.

"My dad is a business owner but not much of a risk-taker, and he felt good about me doing this," says Vehaun, who turned 22 earlier in September. Four months ago, she married Scott Vehaun, who graduated from Carolina in May. "My husband and I spent all of our savings to buy the business. I'd been saving a lot because I knew I wanted to do something like this."

As store owner and principal merchandise buyer, Vehaun is focusing on college-age women, aiming for "a happy medium between preppy and down to earth fashion — a casual but classy look," she says.

After a little repainting and remodeling, the store reopens Oct. 2 with a new name, Wildflower Boutique.

"I've learned a lot in class, but I'm really a kinesthetic learner," she says. "I've learned so much just by doing it, but I've got a lot more learning to do, and I'll be able to apply what I pick up in class to benefit the store."