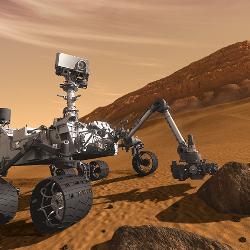 Whether or not life exists or might ever have existed on Mars is a question that has never been answered conclusively. Some of the uncertainty should be removed when a spectroscopic instrument intended to provide information about molecular bonding is sent to the red planet in 2020.

Studying science at a major research university might involve innumerable hours at a laboratory bench, but the experience doesn't have to be geographically limiting. For graduate and undergraduate students in Mike Angel's chemistry group at the University of South Carolina, for example, the work they do in the lab has interplanetary reach.

NASA just announced that Angel is part of a team of scientists whose proposed instrument, called SuperCam, was selected to be part of the next Mars lander, scheduled to launch in 2020. Research in Angel's laboratory during the past 20 years has helped build the foundation for key elements of the scientific instrumentation on the mission, which will continue the search for life, past or present, on the red planet.

Whether or not life exists or might ever have existed on Mars is a question that has never been resolved with certainty, but not through lack of effort. Beginning with the Viking 1 mission in 1976, seven probes have landed on the surface of Mars and successfully transmitted scientific data back to earth.

Those missions have not uncovered unequivocal signs of life, but they haven't ruled it out, either. One limitation of previous probes has been the lack of tools that could provide much molecular information about chemicals on the planet's surface.

Elemental analysis has shown, for example, a range of atoms that are present on Mars. But what's lacking is an understanding of how those molecules are linked together; that is, their molecular structure.

A carbon atom is bound to two oxygens in carbon dioxide, and an oxygen atom is bound to two hydrogens in water. Organic compounds, the stuff of DNA and proteins and all life on Earth, are made up of even more complex combinations of carbon, hydrogen, oxygen and a few other atoms. In the search for life, organic molecules represent a Holy Grail of sorts, but to be able to "see" them you need to have the right tools.

The 2020 Mars probe will carry an instrument never before used on Mars or any space mission. SuperCam, which will sit atop the mission's mobile rover, will include a standoff Raman spectrometer.

"The ChemCam that's on Mars now, on Curiosity [which landed in 2012], has a laser-based system called LIBS for doing elemental analysis of rocks on the surface," says Angel. "An improved version of that will be on SuperCam, but we're also going to have Raman — that's the big change. Raman is another laser-based technique, but it's a molecular technique. It tells you how the molecules are put together."

The two analytical methods, standoff Raman and LIBS (which stands for laser-induced breakdown spectroscopy) can make spectroscopic measurements at a distance from the sample. In both, a laser is briefly pulsed on an area of interest.

LIBS actually destroys a shallow layer of the surface of the target, ablating it to create a plasma, whereas the Raman technique just "tickles" the surface, in a manner of speaking. In both methods, the spectrum of light that emanates from a small area is collected through a small telescope for analysis. Raman and LIBS provide complementary information with a molecular-level description of a surface of interest.

"Using the two together, Raman and LIBS, is the real strength of SuperCam," says Angel. "And because we're able to do it from a distance, 20 feet for LIBS, it really extends the reach of the rover."

Looking to the skies

Angel is one of the pioneers of standoff spectroscopy. He undertook the research more than 20 years ago to develop new ways to do chemical analysis in places where an instrument can't get too close.

"One way I talk about my research is to say that I do spectroscopy, and I like to do measurements in extreme environments. I've been doing this my whole career," he says. "When I first started out as a post-doc, I was working at Hanford in Richland, Wash., where they store high-level nuclear wastes in hundreds of underground tanks, and they were leaking. Back then, I developed this idea of building a small standoff Raman instrument so we could see what was in those tanks. That's how it all started."

Angel has since moved on to harnessing the technology to study hydrothermal vents in the deep ocean. He's also helping develop the method to work from even greater distances so that a planetary orbiter can make the same measurements from distances of several miles. That project is intended for a space probe to Europa, one of the moons of Jupiter, which is considered another prime candidate in the solar system for possibly supporting life.

For Angel, the research he does in an Earth-bound chemistry lab helps satisfy a lifelong curiosity about the universe.

"I wanted to be an astronomer, actually, when I was young," he says. "I've been going in this direction for a long, long time."