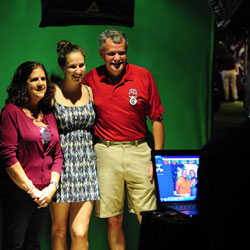 A proud Gamecock family poses for a photo in the green screen photo booth at the 2013 Parents Weekend Beach Bash.

It may be the biggest family reunion you've ever seen, drawing folks to the University of South Carolina from 37 countries, Washington, D.C., and Canada each fall. It's called Parents Weekend. And though it lasts just three days, employees in the Department of Student Life look forward to it year-round.

And no wonder: During the past seven years, the event has more than tripled in size, going from just under 3,000 registered participants to nearly 10,000 in 2013 and again this year.

"When I started in 2007, the schedule only featured about five events," says Melissa Gentry, director of communication and events for the Department of Student Life. "I felt that if family members are coming so far, in many cases, and spending a lot of money to fly here or drive here, and stay in hotels and eat in restaurants, we needed to offer them as much as they could do in a weekend."

As a result, participating family members and their students can now attend a range of signature events including a Friday night "beach bash" at the Strom Thurmond Wellness and Fitness Center that's expected to draw 2,700 people and a Saturday tailgate event expected to draw closer to 7,000.

Throw in ESPN College GameDay, which just happens to coincide with this year's event, and the 2014 Parents Weekend is generating an unprecedented buzz.

"A lot of our families live in cities where they'll never be able to experience GameDay, so they'll get to have a unique experience at Parents Weekend this year," Gentry says.

Visiting families can also attend a resource fair, open houses around campus, educational sessions, a reception at the President's House and a 5k run.

"We've reached out to the university and asked people to host activities during the weekend," Gentry says. "And the university has really responded. It's become a university-wide event instead of just an Office of Parents Programs event."

In fact, the event is now so large and so well attended — "It's the largest parents weekend in the country, that we know of," Gentry says — the Department of Student Life brought on Katie Hambrick this year as the university's new coordinator of parents programs. Formerly with the Office of Fraternity and Sorority Life, Hambrick already knows the event well. She also understands how important it is to students and their families, having participated in a smaller parents weekend event herself, as an undergraduate at Elon University in North Carolina.

"I really love when parents come to check in and they're all decked out in Gamecock stuff because they are so excited and so proud," she says. "The whole weekend has that feel, and it's nice because it make me think about my own family."

"For a lot of these parents and their students, it's the first time they've seen each other since school started," she adds. "I love just watching the interaction, kind of standing back and letting these families have their moments. This is why we do this."