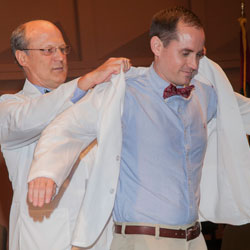 Former Air Force pilot and captain Seth Howell, 29, wanted to be a doctor back in high school. A couple of wars and four deployments later, he's now in his first year at the University of South Carolina School of Medicine — on a new mission, to help people get healthy.

"I'm not committed to a certain branch of medicine at this point," says Howell, who flew a Boeing KC-135 Stratotanker, a refueling aircraft, in multiple war zones, including both Operation Iraqi Freedom and Operation Enduring Freedom in Afghanistan.

"When I envision myself as a doctor, I envision the doctor-patient interaction. That, to me, is what it means to be a doctor — listening to patients' concerns about their health, their anxieties, and inspiring their trust so I can help them get healthy."

It's an interest that began when he was a teenager, after his mother, an elementary school teacher, was severely injured in a car accident en route to watch him play in an away football game. Initially undiagnosed, the injuries to his mother's neck caused chronic and debilitating pain, ultimately requiring a series of surgeries.

"She was the active mom, always out there playing flag football and basketball with us," Howell says. "Watching her go from that level of activity to someone who is on a pain regimen, and will be for the rest of her life, was eye opening. We spent a lot of time in hospitals. That experience is what originally sparked my interest in becoming a doctor."

But a competing urge took Howell down a different track. Like many young men and women of his generation, he was inspired by the terrorist attacks of Sept. 11, 2001, to join the military. After college, Howell signed up for the U.S. Air Force, and during seven-and-a-half years of active duty, the Jefferson, S.C., native visited 13 countries on four continents and 23 states, and earned his share of medals including the Air Medal with three oak leaf clusters and campaign medals for both Afghanistan and Iraq.

It was an experience that broadened his horizons, he says, and set him on a course to the next phase of his life, but it took a couple of very personal incidents before he decided to revisit his teenage dream of becoming a doctor. First, he was involved in the medical transport of a critically ill newborn, barely a day old, from Hawaii to a hospital in California for emergency heart surgery.

"That was kind of what sparked my interest again in giving medical school a go," he says.

Several months later, a close friend was killed in action and Howell served as his escort officer, accompanying the friend's remains back to the States.

"It was a hard time for me and for a lot of people," he says, "but it gave me the opportunity to think about some things that I hadn't thought about, or to think about things from a different perspective. I decided that life's too short not to pursue something if you think that's what you're being called to do."

But Howell's military service was far from a detour. Rather, he says, it gave him the leadership skills he'll need in med school, and more importantly, once he finishes. He also credits his time in the military with giving him a broader view of humanity.

"One thing that's huge, and maybe doesn't get talked about enough, is the level of diversity that you're exposed to in the military," he says. "Had I not joined the Air Force I never would have traveled to so many places and been exposed to so many different cultures and people. You get outside your own bubble. You encounter people around the world who are struggling in ways you never imagined, and then that makes you more aware of how people are struggling here in the U.S."

Now roughly a month into his new mission, Howell finds himself looking back at the events that have led him home to S.C. and to the School of Medicine but also looking forward, to a career in medicine and, most likely, continued service through the Air National Guard.

"I made the transition from thinking about med school to pursuing a career in the military," says Howell, who is using the Post-9/11 G.I. Bill to finance his education. "I guess now I'm sort of coming full circle."