Alumnus looking for the 'greenlight' 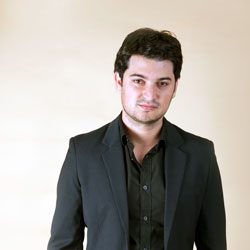 Filmmaker and media arts graduate Taylor Engel is waiting to see whether he gets to direct a feature film through "Project Greenlight."

Taylor Engel is among the top 10 finalists for "Project Greenlight," the HBO documentary series about young directors trying to get their movie projects "greenlighted."

The 2009 media arts graduate says he found out he had made the cut in a Skype call with series producers Matt Damon and Ben Affleck. For this phase of the competition, Engel will have to direct a scene based on a script provided by the producers. That process will be part of the HBO series “Project Greenlight.”

A panel of judges will determine the ultimate winner who will get to direct a feature film.

Taylor Engel is this close to having one of his dreams come true, but talking with the 2009 media arts graduate, you wouldn’t know it.

Engel is among 20 hopefuls waiting to see if their movie projects get “greenlighted.”

“Project Greenlight” is an HBO documentary series produced by Matt Damon and Ben Affleck that offers first-time directors a chance to direct a feature film.

“It’s exciting, but I’m trying not to get my hopes up,” Engel says from Los Angeles, where he moved after graduating from the University of South Carolina.

To get this far, Engel submitted a short film to the project, which was selected from among thousands as one of the top 200. Next, Engel submitted a short bio video that got him a spot in the top 20. Now, he is awaiting judging and popular voting to see whether his short film will get him a spot in the top 10 and on the show. (A panel of industry judges will choose nine finalists and the popular voting online will choose the 10th.)

His short film “The Pavement” is a 3-minute looping story that grows in complexity with each retelling.

Engel grew up in Charleston and says he has always wanted to be a filmmaker – or a magician.

“It’s something I’ve been doing as long as I can remember,” he says. “But I was also interested in magic and misdirection. Now I try to make an audience believe a certain thing.”

He says he chose Carolina, in part, because many of his high school classmates came here.

“Carolina is a big school, but it has a small school feel,” he says. “Especially in the media arts department. It just felt like a small arts school.”

Two classes, he says, particularly influenced him. One was a film class with adjunct professor Larry Hembree. “We would watch a movie at the old Nickelodeon, then we’d go down to the basement and talk about it. He was an amazing teacher.”

The other was taught by media arts professor Susan Hogue. “She let us create our own class,” Engel says. “She guided us but she left us on our own to make our film. It was one of the most professional productions that I have ever worked on.”

After graduation, Engel and his girlfriend took off for the West Coast. She had an internship lined up; he secured his internship during the three-day, cross-country drive.

For the past three years, Engel has been working with Motive Creative, making movie trailers, so coming up with a complete story in the allotted three minutes for the short film competition was not that difficult.

“I have learned a lot about how to tell a story in a very short period of time,” he says. “Movie trailers are sometimes only a minute-and-a-half long. This was almost a luxury having three minutes.”

Popular voting for Round 3 of Project Greenlight ended Friday (Sept. 26). The top 10 will be announced in October.

If he makes it to the next round, Engel will have to direct a scene based on a script provided by producers. That process will be part of the HBO series “Project Greenlight.” A panel of judges will determine the ultimate winner who will get to direct a feature film.

You can watch all the videos made by the top 10 finalists and follow UofSC alumnus Taylor Engel's progress in the competition at "Project Greenlight."