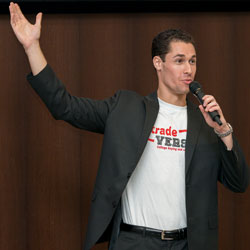 Mike Meyers pitched his idea for Tradeversity to the USC Columbia Technology Incubator and won a year of free space there to develop the fledgling company.

What's the alternative if you want to buy or sell a used laptop, futon or iPod but don't want the potentially messy transaction of eBay or craigslist?

Mike Meyers and a team of fellow business school students are creating an online marketplace for University of South Carolina faculty, staff and students and bootstrapping their fledgling company in the process. It's called Tradeversity, a student-run startup that has already attracted more than 300 student users.

"What we envision is a safe and convenient website for the university community to buy and sell things to each other," says Meyers, a marketing, risk management and insurance senior in the Darla Moore School of Business. "What makes Tradeversity safe is that only people with an sc.edu email account can register to use it. So as a buyer or seller, you know you're always dealing with a student, a faculty member or a staff member here on campus."

Meyers got the idea for Tradeversity a while back when he was hard up for spending money and wanted to sell a few spare bookbags. He was leery of craigslist, not knowing if prospective buyers were legit or if the part of town where they wanted to meet him was safe. eBay transactions require shipping expenses and a 10 percent transaction fee, and Meyers' Facebook postings offering the bookbags for sale were overwhelmed by the sheer volume of Facebook traffic.

What he wanted was a buy/sell website that was limited to the UofSC community. He shared the idea with his younger brother Evan, a business student at Virginia Tech, and their mutual friend Alex Sands, a Wharton Business School (University of Pennsylvania) student. Together they hammered out the plan for Tradeversity, which is launching at the three universities and could expand to other institutions across the country.

There are no fees for basic posting and selling of items on Tradeversity although a premium listing displays items more prominently for a nominal cost. The business plan calls for offering space on the site to retailers, restaurants and service providers who will offer exclusive deals to the university community. Web traffic to those deals will generate advertising revenue, Meyers says.

"Our revenue is based on the number of eyeballs on the page. A lot of Tradeversity users will be students in the 18-25 age range, and that's a demographic that retailers really want to reach, especially around a university campus," he says.

Meyers has been the beneficiary of solid advice from several Moore School professors, staff from the USC Columbia Technology Incubator and the dean of the business school. He recently won a pitch competition that came with one year of free space in the incubator.

Six Moore School students are working as unpaid interns for Tradeversity this fall, and their talents should help the fledgling company hit its targets early on, Meyers says, adding that he is all in on his commitment to making the company a success.

"I passed on a couple of job opportunities to stick with this," Meyers says, "but I figure now is the time to take a risk. If it doesn't work out, I can always get a job. But this could really be big."