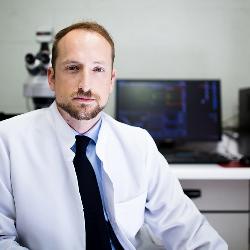 Andrea Bonisoli Alquati is president of the USC Postdoctoral Association, which is organizing several professional development seminars this fall about preparing an effective job application package.

Mutated animals, radioactive contamination and buildings deserted for decades might not be everyone’s cup of tea, but for Andrea Bonisoli Alquati the Chernobyl Exclusion Zone was an enticing brew.

“I went for the first time to Chernobyl in 2007,” says the postdoctoral researcher working in Tim Mousseau’s laboratory in the department of biological sciences. “Once I was there, I was hooked.”

A native of Cremona, a northern Italian city noted as the source of some of the world’s finest violins and most accomplished violin-makers, Bonisoli Alquati first viewed the Chernobyl landscape while an upper-level graduate student enrolled at the University of Milan. Participating in field research in that desolate part of Ukraine, site of the world’s worst nuclear accident in 1986, hooked him on wanting to understand how radioactive contamination can affect evolution and helped define the course of his career.

He hadn’t set out to study radiation effects on animals. Instead, in his early studies he immersed himself in the basic sciences of animal behavior and evolution. When he was younger, Bonisoli Alquati had read and been fascinated by the book “King Solomon’s Ring” and other writings of Konrad Lorenz, who shared the Nobel Prize in 1973 for his contributions to the field of ethology, or the study of animal behavior.

Inheritability: from color to behavior

Lorenz had published seminal experiments in the 1930s showing that animal behaviors and their inheritability could be objectively studied in the same way that physical traits could. A few decades earlier, near the turn of the century, the modern understanding of genes was established through the study of how physical traits, such as the color of peas in a pod, were inherited over generations of carefully controlled cross-breeding experiments.

Lorenz and his fellow ethologists showed that a whole range of behaviors could be identified and tracked in a similar manner. In a series of essays and writings intended for the general public, including “King Solomon’s Ring,” Lorenz told the story of those discoveries.

Following along a path similar to Lorenz’s, Bonisoli Alquati worked extensively as a graduate student with the barn swallow, a common bird worldwide and one for which seminal behavioral studies in the 1990s established it as a model species in the wild for evolutionary research.

Birds, feathers and the rules of attraction

“Barn swallows have sexually selected traits, such as the tail streamers, which are selected for length,” says Bonisoli Alquati. “They’re also selected for symmetry.”

The sexual behavior is thus affected by the physically observable characteristics of the feather. Female barn swallows want nice long, symmetric tail streamers. Any would-be suitor with short, asymmetric streamers will simply not be invited up to the nest for a drink or two.

And even if one of those unsightly male trolls manages to find a mate above his station, in a manner of speaking, sexual selection is still in play. According to Bonisoli Alquati, in a beauty-and-beast pairing, the offspring get short shrift from their mothers.

“I was studying the transfer of nutrients, immune factors, hormones and other substances through the eggs to the offspring and its effects on their development and fitness,” Bonisoli Alquati says. “If you manipulate how ornamented, how high-quality the male partner is, you see that the mother adjusts these contributions to the eggs in a way that is predicted to affect the offspring’s fitness.”

In other words, the mother bird’s behavior in response to a less-than-desirable mate is to make their offspring’s long-term survival more difficult. (To ethologists, “behavior” includes any response to the environment, even if it might appear an animal doesn’t have “control” over it, such as nutrients passed from a mother to an egg.)

That variability in the maternal instinct is just one example of several that make the barn swallow an ideal nuclear-era update to the canary in the coalmine. Working in Mousseau’s laboratory, Bonisoli Alquati is able to discern very small effects that low-level radiation can have on animals in Chernobyl that might have large consequences for the survival of the species as a whole.

Taking the next step as a postdoc

Bonisoli Alquati recently took part in a campuswide effort to help support Carolina postdocs. He was elected president of the USC Postdoctoral Association, which was formed less than a year ago and now has more than 60 members. The leadership role has been highly beneficial to his own career planning, he says.

“Coming here from Europe, it has been very helpful for understanding the cultural differences when you are involved in a job search,” Bonisoli Alquati says. Through the professional development courses that the association has organized, he has come to see that the expected approach in American institutions is different from what he was accustomed to in Europe.

“To be successful here, you have to work a bit to sell yourself. You have to be more aggressive,” he says. “I may have been a little bit naïve before about that."

The association is continuing with workshops and presentations over the fall semester, and Bonisoli Alquati plans to hone his writing and presentation skills so that he can land a faculty position involving both teaching and research. With five trips to Chernobyl and four trips to Fukushima under his belt already, Bonisoli Alquati (who has posted a number of pictures he's taken of the areas) knows more than a little bit about getting through a trying environment successfully.

To learn how you can support groundbreaking research like Andrea Bonisoli Alquati's, visit Carolina's Promise.