Art and the city 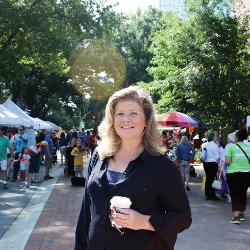 As deputy director of the Columbia Museum of Art, Joelle Ryan-Cook has a front-row seat for Main Street’s revival. She also has been there from the beginning, having begun her career as a museum tour guide in 1993 while she was still in graduate school at the University of South Carolina and while the museum was still on Senate Street.

Five years later, when the museum relocated to the corner of Main and Hampton, downtown was still something of a 9 to 5 world: abuzz by day, a ghost town after dark.

“When we first moved to Main Street, we watched lawyers and bankers walk around during the day, during the week, and no one at night or on the weekends,” says Ryan-Cook. “In the last five years, we’ve seen an incredible change.”

Major exhibitions — including a 2012 Mark Rothko show curated by the museum, then sent on a nationwide tour — raised the bar for what the public can expect on the museum walls. Meanwhile, programs like the quarterly Arts & Draughts block party have attracted a younger, larger audience that spills onto the plaza.

But the art museum hasn’t gone it alone. Ryan-Cook credits more than 100 partnerships, both large and small, for helping the museum achieve its goals. Among those partnerships she credits multiple local businesses and arts organizations but also several departments at the University of South Carolina.

Those relationships with her alma mater are not strictly academic in nature, however, and not confined exclusively to the visual arts.

“Ten to 15 years ago, we gave art history lectures — and that’s still at the foundation of what we do — but we had to start thinking about what it is that everybody else wants, too,” says Cook. “By design, we looked at partnerships to see how other people see the museum and want to use it. That starts with people like (poet and UofSC English professor) Ed Madden, and the university's School of Music. We even had the philosophy department work with us on Arts & Draughts.”

“All of that was by design,” she adds. “Now it’s becoming organic.”