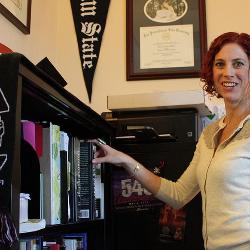 Biological anthropologist Sharon DeWitte is part of the second group of professors from the College of Arts and Sciences at UofSC to be named McCausland Fellows.

Sharon DeWitte first became interested in bones at the age of 14, when the California native had surgery to correct scoliosis of the spine.

Now she spends weeks each summer in London, where she analyzes the skeletal remains of more than a thousand men, women and children who lived before, during and after the Black Death.

She is looking for clues about who survived, who died and “how the disease might have shaped human evolution.”

“We should always expect mortality to be selective and to target certain individuals. So if we expect that, then we can identify the factors that are going to elevate someone’s risk of death in future epidemics, and then we can actually do something to reduce these risks,” says DeWitte, a biological anthropologist and professor at the University of South Carolina.

DeWitte is part of the second group of professors from the College of Arts and Sciences at UofSC to be named McCausland Fellows. The fellowships reward professors for excellence in teaching and research and are funded by a $10 million endowment given to the college by alumnus Peter McCausland (’71), chairman and chief executive officer of Pennsylvania-based Airgas Inc., and his wife, Bonnie.

“I use my research in the classroom all the time,” says DeWitte. “Most everything I learn eventually finds its way back into the classroom.”

This year’s other recipients, all chosen by the dean of the college, are English professor Federica K. Clementi, studio arts professor Sara Schneckloth and history professor Adam M. Schor.

Clementi, whose recent book focuses on the mother-daughter bond as depicted in six works by Jewish women who experienced the Holocaust, plans to use her McCausland stipend to do additional research at the YIVO Institute for Jewish Culture in New York, where she will find artifacts to bring back to her classroom.

“Ultimately, it’s what I do: teach,” Clementi says. “It’s a very special commitment to look at these young people and know they are going to make a difference – for better or for worse. But because we want it to be for the better, that’s really why we’re here.”

Schneckloth, who teaches the entire range of drawing classes, would like her students to leave her classroom having learned to find their voices and express themselves more freely.

“So much of what I do in the studio is about experimentation and just being able to discover new ways of putting materials together, new ways of articulating ideas and then bringing that back to the classroom and giving my students free rein to explore and discover for themselves.”

Schor wants his students to better understand the early centuries in the ancient Mediterranean world that led to the rise of Christianity, Judaism and Islam.

Nearly half of the $10 million gift will be used for the McCausland Faculty Fellows Program, which ultimately will offer 20 fellowships to outstanding faculty members from the College of Arts and Sciences who are within 10 years of earning their terminal degrees. Those chosen as fellows must demonstrate leadership in their academic field and a strong commitment to teaching.

To learn how you can support ground-breaking research and teaching excellence at the University of South Carolina, visit Carolina's Promise.