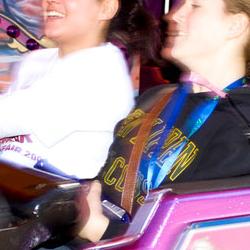 For 17 years and counting, Midway Physics Day has been showing S.C. kids how the laws of physics influence everything around them.

It’s the smell of elephant ears, mustard and fried everything. It’s the uneasy feeling in the pit of your stomach as you clickety-clack up the first hill of the roller coaster. It’s the South Carolina State Fair, and it’s also Midway Physics Day, when thousands of kids from across the state learn that science can be cool.

For 17 years and counting, Midway Physics Day has been showing S.C. kids how the laws of physics influence everything around them, bringing classroom learning into the real world — a really fun real world.

“It’s fabulous when you can actually go play with something and it connects with what you’re learning in the classroom,” says Jeff Wilson, a university physics professor who, along with fellow professor Dave Tedeschi, leads the physics day at the fair.

This year, Wilson and Tedeschi and a host of Carolina faculty members and students are bringing physics to life for more than 2,400 students from 61 middle schools and high schools. They’re being brought by some 200 teachers excited to share the event with their classes. Even recent Gamecocks are taking advantage of the program. “One of my former physics students is now a teacher in Chapin,” explains Tedeschi, “and she is bringing her class for the first time this year.”

Students get to see the laws of physics at work through hands-on experiments like dipping a balloon into liquid nitrogen. Then they head out to the Midway. For most of the kids, that’s when the thrills really begin. But even taking a spin on the Polar Express or the Giant Wheel can teach them about physics. Armed with instruments like accelerometers and barometers, students take measurements while flipping and soaring through the autumn air. It’s a thrilling experiment, one ride at a time.