Behind the lens, ahead of his time 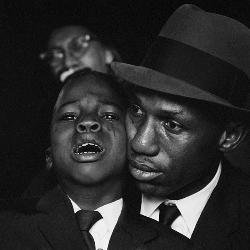 Portraits by a young man

Constantine Manos was an accomplished photographer before he even finished college. Here are some images he shared with @UofSC.

Picture this: Columbia, S.C., 1953. Constantine Manos, who goes by the common nickname for young Greek men – Gus – is a 19-year-old sophomore at the University of South Carolina.

He was born in Columbia, the son of Greek immigrants who own a restaurant, where he often helps out.

It is the height of the Jim Crow era in the South. A lawsuit that got its start in the segregated schools of South Carolina is making its way to the U.S. Supreme Court, challenging the concept of “separate, but equal” that the white establishment in the South used to keep black children in substandard schools and away from white students.

Manos has become such an accomplished photographer that his Carolina professors suggest he major in something else because they really cannot teach him anything else about the profession that would become his lifelong passion and career.

Manos, the shy, quiet young man who lives behind his camera, decides to take on the South and one of its worst institutions in the pages of the student newspaper, The Gamecock.

He does it with three editorials that predate the groundbreaking 1954 Supreme Court decision in Brown v. Board of Education, each message calling for the end of segregation in U.S. public schools.

“I felt bad about segregation and I wanted to do something about it,” says Manos, now a world-famous photographer who lives and works from his home base in Massachusetts and looks back on more than a 60-year career, photographing some of the biggest events of the late 20th century. His work is in the collections of major museums, including the Museum of Modern Art in New York, the Art Institute of Chicago, the Museum of Fine Arts in Boston, and many others.

“Segregation is wrong. Its practice is sinful, hypocritical, and backward. It represents the antithesis of the great concept of the brotherhood of man.  … It confines a specific group of people to an intellectual and spiritual prison.”

Manos grew up in Columbia, along with a sister and brother. He attended Logan School, Wardlaw Junior High School and Columbia High School. He started taking photos at the age of 13 as a member of the camera club.

“Wardlaw had a darkroom and I learned how to develop film and make prints, and I became very passionate about photography,” Manos recalls. “By the time I was 15, I was doing picture stories for The State Sunday magazine section.

“In those days, you had to know how to use an exposure meter and set the aperture and the shutter speed on the camera. Nothing was automatic. Very few people had a serious camera and were serious about photography. Now you can take pictures with a cellphone and put it in the newspaper.”

Manos chose to attend the University of South Carolina, “because it was there, I was there and it was very affordable for my family.”

He had a scholarship to study photojournalism, but because he was a working professional – while still at Carolina he worked as the official photographer for the Boston Symphony at its summer music festival – at the end of his first year, his professors suggested he major in something else.

“They told me there was nothing more they could teach me,” Manos says, adding that he changed his major to English literature. “That was a wonderful thing that happened because I got a very good education. I studied art history and music and literature. There were some great professors at USC. I studied art with the professor who taught Jasper Johns. I am grateful for the education I received at Carolina.”

But, for Manos’ entire educational experience in South Carolina, he attended segregated schools, including the university.

“We are appropriating huge sums of money to build and support two separate and equal school systems in a state whose educational standard is still among the lowest in the nation. We should be concentrating all our financial and other efforts to building one truly fine school system for the children of the state.”

Just a year before he wrote that editorial, Manos had traveled to Daufuskie Island, a small sea island off the coast of South Carolina, reachable only by boat. Its inhabitants were mostly descendants of former slaves who made their living from the sea and small farming.

“I heard that it was very isolated,” Manos says. “I hitched a ride on a boat and went out on the island and took my first serious pictures, which I am still very proud of and which are quite beautiful.

“These were wonderful people who made their living gathering oysters and crabs from the sea, and they did a little farming. They lived a very simple life. They had a church. They had a school. That was my first exposure to really trying to do something beyond just taking pictures for the newspaper.”

Back at Carolina, Manos was learning more and more about the wide world of photography, choosing famed photographer Henri Cartier-Bresson as his role model.

“I discovered what camera he used and what film he used,” Manos says. “He became my mentor from afar.”

Manos immersed himself in photography and began photographing local events he considered to be of historical interest. “A lot happened in those years,” he says. “I heard that there was to be a Ku Klux Klan rally outside Columbia in a cotton field. I felt that it was important to document this event.”

“In our approach to the problems put forth by a practice which has settled itself comfortably upon us through the years, we must remain cool. We must discuss the situation logically, giving each man's opinions full consideration regardless of whether they coincide with ours or not. Above all, we must attempt to control emotional outbursts on the matter, for they can only make the situation worse.”

Manos’ editorials didn’t spark much response on campus – though he says some community members called his parents’ home.

“I personally got no flack at all from any of my fellow students,” he says. “We got one or two calls at home, and I guess somebody was ugly on the phone with my mother, but her English wasn’t that great — so I think it bounced off her.”

The reaction was the same for a peer and friend of Manos — Jack Bass — who would go on to be a famed newspaperman and author who chronicled key historical moments, particularly of the civil rights era, in South Carolina. Bass was Gamecock editor in the spring of 1955 and remembered writing his own take on a later decision by the Supreme Court in which Bass supported the end of segregation.

“Not everybody was happy about it but not everybody was against it either,” Bass recalls. “A couple of faculty members made nice comments. I do recall there was no great hue and cry about it. I never felt really harassed or anything about it.”

For Manos, 1955 marked the end of his Carolina career. He had gone to summer school and was graduating early.

“I wasn’t at my commencement,” Manos says. “I was just too impatient to go to New York and immerse myself in the big world of photography.”

But first, Manos was drafted into the U.S. Army and served his time in Germany as a photographer for Stars and Stripes, then returned to New York where he worked as a professional — shooting assignments for Time Life books and corporate annual reports to help pay the bills.

His first book, “Portrait of A Symphony,” was about the Boston Symphony Orchestra  with which he maintained a working relationship for years. It was published in 1961.

“After that book was published, I went to Greece and did a book that really launched my career: ‘A Greek Portfolio,’ Manos says. Three more books followed: “Bostonians,” “American Color” and “American Color 2.” With the two color books, Manos displayed a unique and personal vision of American locales and events — such as Bike Week at Daytona Beach, Fla., and Venice Beach in California.

He says his Gamecock editorials were probably the most political work he has done, though he also covered a civil rights march on Washington, Martin Luther King’s funeral, the Montgomery bus boycott, Nixon’s inauguration, the 1968 Democratic National Convention and others.

“I was a photojournalist who also did commercial work, but I always did my own personal work,” he says. Many of his best stories were self-assigned.

That personal work led Manos to become a partner in Magnum Photos, the famous international cooperative, of which his mentor Henri Cartier-Bresson was one of the founding members.

And he shares his skill and talent with younger photographers. “A lot of my students are like family,” says Manos, who has no children of his own and never married. “I have been teaching workshops for almost 30 years and I have had a number of students who became fine professionals. And they’re really close; they’re like my children.”

To learn more about Constantine Manos' photography, visit his website.