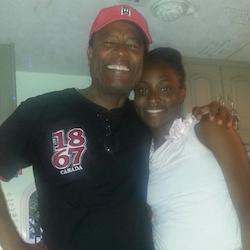 Jasmine Johnson was one of four students chosen nationwide to travel the country meeting some inspiring people.

Last year, if you had asked University of South Carolina junior Jasmine Johnson what she would be doing with the rest of her life, she probably would have said she was staying in South Carolina to teach.

“After my experience, I feel like I can go anywhere and do anything,” says the Florence, SC native, all because of one advertisement she found on Facebook.

After a compulsive click on the online advertisement, a video application and a week full of interviews, the middle level education student was chosen to be one of four students to take part in College Board and Road Trip Nation’s cross country excursion.

Johnson and the four other students came from different schools and backgrounds, but all had one thing in common: they are all first-generation college students, meaning they are the first in their families to go to college.

After flying to California, Johnson and the others spent 34 days traveling the U.S. on a 35-foot bus, sharing on bedroom and bathroom, all the way to New York City.

“That was my first time ever flying,” Johnson says. “So I thought that was so exciting. Little did I know what was about to happen to me over the next month.”

Aside from bungee jumping and visiting some of the greatest American landmarks like the Grand Canyon, Johnson met some of the country’s most inspiring people like musician John Legend, Arne Duncan, the US Secretary of Education and David Lopez, the executive director of Teach for America.

Johnson says out of the twenty people they met along the way, two very different people made a lasting impact on her.

“Howard Schultz, the CEO of Starbucks, was raised in the projects and now has one of the biggest companies in the world,” Johnson says. “It was so refreshing to hear about his struggles and learn that his goal has never been to make a lot of money, but to look out for his family and employees. He wants to make sure everyone that works for Starbucks get’s a great education.”

Meeting Odessa Woolfolk of the Birmingham Civil Rights Institution, who halted her career as a teacher to join the civil rights movement, humbled her.

“She was beaten down and told no over and over again,” she says. “But she taught me that until we get what we want, we fight. It wasn’t just blacks that were effected, it was everyone at that time, and she made me really appreciate how lucky I am now.”

Johnson adds that there were three other people that taught her about herself and appreciating this opportunity.

“What the other three students on this trip taught me was invaluable,” she says. “I’ve been through things and seen some dark times, but so have they and they taught me that those experiences have made me stronger.”

Before her days as a Gamecock, Johnson says her and her family experienced homelessness and financial struggles.

“We would have the lights cut off sometimes or my mom would make meals for an entire week out of a couple cans of food,” she says. “Aside from struggling financially, I struggled more emotionally. It get’s to a point where you give up finding hope.”

But something in her gave her the push to make a decision she would later not regret.

It wasn’t until the end of Johnson’s senior year of high school that she decided to go to college.

“I felt guilty leaving my family,” she admits. “I wouldn’t be there to take care of them and I felt selfish for that.”

Even after the bravery it took her to enroll at UofSC, Johnson says she was close to dropping out during her first year. Being away from her family took a toll on Johnson and she was close to giving up, until one teacher inspired her to move forward with her education.

“If it wasn’t for Miss Kim Smoak I wouldn’t be here today.” Johnson says

Smoak, a professor in the College of Education, was one of the first people at UofSC that helped Johnson with the aspects of college life she was never prepared for.

“I’ll never forget it, she looked right at me and said ‘If you drop out your mother will regret the decision to let you go for the rest of her life,’” she says. “That was enough right there to make me stay. And thank goodness I did.”

The experience she received through the first generation road trip changed Johnson for the rest of her life and Johnson says the opportunities for her are now endless.

“Opportunities are going to come into your life and it is up to you to take advantage of it,” she says. “I am so overwhelmed with what I’ve done and it makes me want to share my story. I understand what it’s like to be hopeless and come from nothing, but just look and all that I’ve accomplished in such a short time. You can’t let your circumstances dictate what type of things you do.”

When she graduates, Johnson plans to teach in South Carolina for a short time before moving and starting an after school program for children.

“Every student needs someone to talk to in a safe environment,” she says. “I can give my students that and allow them to make relationships and learn about themselves.”

Johnson says she has also made one promise for herself in the near future: she will make her final year at UofSC her year.

“I’ve been working since I was 16 and I just want one year to go to football games and enjoy my time here. I’ll make it work somehow, but I want a year for myself,” she says.

Whether Johnson stays in South Carolina to teach or travel to California, she says this experience has molded her view of the world and herself in a way that has only been beneficial.

“I’m still in shock about the whole experience, all I did was click on a Facebook ad,” she says. “I now can do things that make me happy and have the college experience that I want to. This whole thing has been just amazing.”