Jeb Bush to speak at commencement 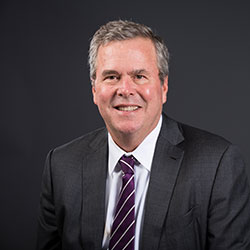 The 3:30 p.m. ceremony for baccalaureate, master’s and professional-degree recipients from all eight campuses will be in the Colonial Life Arena.

The doctoral hooding ceremony will be at 1:30 p.m. at the Koger Center for the Arts. Brian Johnson, president of Tuskegee University, will be the speaker.

Jeb Bush was elected governor of Florida in 1998 and 2002, becoming the state’s first two-term Republican governor. As governor, he was credited with contributing to economic, environmental and health care improvements and an overhaul of Florida’s education system.

With his sister Dorothy Bush Koch, Jeb Bush is co-chair of the Barbara Bush Foundation for Family Literacy. His think-tank institute, the Foundation for Excellence in Education focuses on advancing policies that will maximize every student’s potential for learning and prepare all students for success in the 21st century.