LOL in the classroom 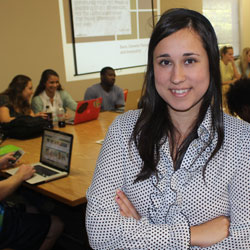 Not a standup comic

Anais Parada doesn't waste time telling jokes in her anthropology classes, but she — like many faculty members — has found the value of relevant humor to make a memorable point while teaching.

Students taking Claudia Benitez-Nelson’s introduction to oceanography course are soon in over their heads trying to make sense of the complex process of nutrient cycling in the world’s oceans.

But instead of resorting to the periodic table, Benitez-Nelson uses humor to help her students understand.

“I ask them if they’ve ever been to an outdoor concert or a 10k race where there are lots of porta-potties,” says Benitez-Nelson, a marine science professor who has won the university’s top teaching awards. “The best time to use one of those things is the beginning of the day, right? Before it’s full of ‘nutrients.’ I explain that the Atlantic Ocean is relatively young — it’s like a porta-potty in the morning — and the Pacific Ocean is older and much more full of nutrients, like a porta-potty at the end of the day.

“They might not remember anything else, but they remember that.”

And that, many professors agree, is why relevant humor can be an effective teaching tool. Research shows that humor in the classroom also lowers students’ anxiety and even helps them see their professors as more competent communicators.

That’s what Anais Parada has found in her own short teaching career as a Ph.D. candidate in anthropology. She presented on the topic of humor in the classroom at the Center for Teaching Excellence’s recent Oktoberfest.

“I’m not a standup comic, I don’t make jokes,” she said, “but I use video clips from standup comics that illustrate a point about language. Or I might embed a cartoon or comic strip in the PowerPoint that pertains to the topic of the day.”

Parada has heard plenty of reservations about using humor in class: Students might not get the jokes because of their age or that it will turn the classroom atmosphere into a free for all.

“It’s like judo. You use the energy from a student’s joke or a humorous comment in classroom discussion to further the scholarly conversation,” she says. And as for students not getting a joke because of their age, “I’ve shown Monty Python clips from 40 years ago, and they get it.”

Brad Collins has taught art history at Carolina for 28 years and last year was included in the Princeton Review’s list of 300 best professors. He’s found that being spontaneous and finding humor in the lecture material “tends to wake them up. There’s something about humor that is exhilarating, and it also tends to be more memorable."

“If you can use the joke to make the point, not just humor as an aside, but to sharpen the point you’re trying to make, then it’s worthwhile. I consider it a learning tool.”

Chris Holcomb, a professor and director of First-Year English, has long used humor in the classroom as a way to capture and hold students’ interest.

“But it wasn’t until I co-authored ‘Understanding Language Through Humor’ with (linguistics professor) Stan Dubinsky that I developed a more explicit rationale for incorporating jokes into my teaching,” Holcomb says. “Stan selects bits of comedic material whose humor hinges on linguistic phenomena that students often struggle to understand when they are presented with them in a serious mode.

“I now make a more conscious effort to teach through humor and not simply with it. The bits of humor I use must instruct as well as delight.”

Parada puts it simply: “Humor gets students to engage, it helps them talk to me, and many of them want to keep talking to me after class about the lecture.”