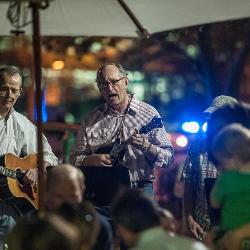 Several years after graduating from Carolina, while working in a boutique in Ohio that specializes in distinct, colorful, finely crafted eyeglass frames, Mark Plessinger came up with a plan.

“That was the point at which I understood how my uniqueness and my creative bent can be a part of what I do on a daily basis,” says the 1996 hotel, restaurant and tourism management graduate.

A return to Columbia in 2005 gave Plessinger the chance to live in a metropolitan area, stay close to his family, be a part of a vibrant arts scene and open his own high-end frame shop on Main Street: Frame of Mind.

Plessinger soon noticed that Columbia’s arts scene had made great strides since he’d left. “I could feel the wave building,” he says, “and I wanted to be on the front edge of that wave. That’s what this store is all about: trying to be an agent of change.”

His passion for the arts complements the boutique, which he considers a form of art in its own right. “So we started tying ourselves to the local scene by hosting art shows,” he explains.

Plessinger also sees a correlation between his frame shop and the city.

That series of small art shows at his boutique morphed into a much-anticipated monthly event. First Thursday now spans six blocks and features all manner of artists, musicians and performers from Columbia and beyond.

“Every day, I’m kind of shocked at how deep our arts scene is,” Plessinger says, noting the scene’s continuing growth. “Everything adds up. You don’t have a brick wall overnight. Bricks are laid individually.

“I would never say that First Thursday is the cause of the recent surge in Columbia’s arts scene or of Main Street’s resurgence,” Plessinger adds, “but people seem to be embracing what we have here. I know that some little piece of this comes from First Thursdays.”

A version of this story originally appeared in USC Times' October edition.