Let there be rock 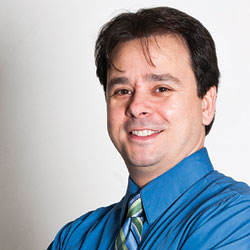 Michael Bizimis knows plenty about rock, but his first true love? That was heavy metal.

Drop by USC’s geochemistry lab, and Michael Bizimis might show off a hunk of basalt from a Hawaiian volcano, explaining how its heterogeneous composition holds the key to all sorts of mysteries about the Earth’s mantle and crust. But step into his office, it’s a different story — especially if you ask about the electric guitar mounted on his wall.

“That’s what I used to do, back in Greece,” he says. “I was in a heavy metal band called Guardian Angel.”

Bizimis grins as he recounts his early obsession with AC/DC, whose album “Back in Black” was the first record he ever cranked on his parents’ stereo. And when he recalls his first guitar or the first time he played live, with a few friends in the high school gym, it’s as if he can still hear his very first power chord, his classmates cheering.

“I loved the feedback from the people, playing live. It was my first real connection with a crowd,” he says. “That was exciting. That was the big ‘Aha—I like this! This is fun!’”

Bizimis stuck with his “intense hobby” while at the University of Athens, playing on weekends, working summer jobs to finance studio time. He sported a white leather jacket with the ace of spades on the sleeve, wore a studded leather belt, grew out his hair. And then he quit the band in 1995 to come to the U.S. for graduate school and to pursue a career.

But don’t think for a millisecond he’s forgotten the thrill of banging out an Iron Maiden classic, or an original composition by Guardian Angel, before a live audience.

“When I teach and when I’m in front of people playing music, it’s quite similar,” he says. “You get a rush. Having the back and forth with the students, you play to the room and feed off the response. I just love that feedback, because you can feel it.”