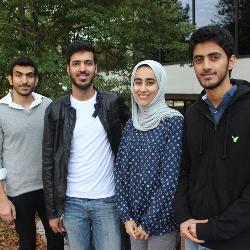 Among Carolina's 75 Omani students are several members of the same extended family.

When Salima Al Masrouri walks across the commencement stage with a master’s in mass communication degree, she’ll join a growing contingent of University of South Carolina graduates who hail from Oman.

In fact, Carolina has what might be the largest single group of students from that southwest Asian country who are attending college in the United States.

“Most universities in the U.S. have only a handful of Omani students,” said Jody Pritt, director of International Student Services at Carolina. “We have 75, and five more are on the way in January.”

Carolina’s “Omani boom” began as a trickle in 2005 when two students enrolled at the university through an Omani government-sponsored scholarship program. Three years later, the university set up a collaborative agreement with Oman’s Ministry of Higher Education, and the numbers began to grow.

Sultan Al Masrouri, Salima’s cousin who also graduates this month with a bachelor’s in civil engineering, began attending Carolina in 2010 when there were 14 Omanis here.

“I was 17 when I decided to come to the U.S., and I was choosing between Penn State and USC. Weather was one of the factors — I didn’t want all the snow,” he said, adding that South Carolina’s climate is partly what makes the university attractive to Omani students. His younger brother Mundher is now a student at Carolina, too.

Carolina’s biggest draw for Omani students is the overall student experience. “It’s a small country and everyone knows everyone,” Pritt said. “So many of the Omani students have had a good experience here.”

And those students have been speaking up when the Ministry of Higher Education in Oman holds information sessions with college-age students there, says Sultan Al Masrouri. “Word of mouth is important. A lot of Omanis have great things to say about the university,” he said.

“There’s so much you can do here — concerts, activities, the International Student Association always has things going on — so you’re never bored and you have lots of opportunities to share your culture with others,” Salima Al Masrouri says. “I have friends who went to the U.K. for college, and they didn’t have any of the student activities that we have here. As a result, they made no British friends — I have a lot of American friends.”

Al Masrouri, her younger brothers Ishaq and Hamdan and cousin Sultan say the trend of Omani enrollment at Carolina will likely continue, given the positive experiences of so many during the past few years. And when those students graduate, there is now an official university alumni club for them to join back home in Oman. Mazin Al Masrouri, Salima’s older brother who graduated from Carolina in May 2013, is vice president of the chapter.

The Omani-Carolina pipeline will soon work in both directions. In 2015, the university is planning a two-week study abroad trip to Oman during Maymester. Education professor Christian Anderson will be leading the trip, and student applications are being accepted now. Carolina students will have an opportunity to visit a country that “outdoes our Southern hospitality,” Pritt said.

Greeting the students at the Omani airport next May will be Salima Al Masrouri, a proud UofSC alumna.