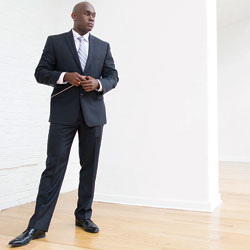 The road to Atlanta

After completing a music degree at Carolina in 2004, Joseph Young honed his skills as a conductor and was named assistant conductor of the Atlanta Symphony Orchestra in summer 2014.

The mid-summer sky is clear blue. An evening storm has washed away the heat and humidity. Lawn chairs, blankets, homemade picnics and fast food takeout decorate the grass of Piedmont Park in Atlanta’s Midtown. The crowd is eager to witness the coming out party of the city’s newest musical talent.

Dressed in white jacket and black pants, the 31-year-old graduate of Carolina’s School of Music cuts a handsome figure as he steps to the podium. His baton at the ready and the orchestra poised to play the first note, the next few seconds are tense.

“The most nerve-racking part of any performance is the silence right before sound happens,” he says. “Then from the first down beat to the end of the last chord is why I love being a conductor.”

As tribute to the upcoming Independence Day holiday, tonight’s concert has a distinctive American theme. To open the performance, Young leads the orchestra through John Williams’ “The Cowboy Overture.”

“Working in front of an audience is what drives me,” Young adds. “One of the most ironic things about conducting is the fact that I say nothing. I emote all the passions, emotions and nuances through the musicians. This dance between musicians and conductor is what I enjoy the most. The connection makes each performance different.”

With the sunlight fading and the stage lights brightening, selections from Aaron Copland’s “Rodeo” suite hold the crowd’s attention. Most are familiar with the classical interpretations of Western-styled folk tunes made famous by beef commercials,
TV shows and the movies.

Visions of a grand stage

Young grew up in Goose Creek, S.C., raised in a Navy family. Pushed by his father to find something to do to stay out of trouble, he tried out for the middle school band program.

“It really wasn’t an audition at all,” Young recalls. “There were several instruments on a table and you were asked to play them. The trumpet was the only one I produced sound from.”

Young embraced the instrument and he was eager to improve. The band room became his refuge. After school he spent lots of time practicing alone and with others. “I had a great music teacher,” he says. “He always encouraged us to do better.”

And Young stayed with it. In high school he earned spots in both regional and all-state bands and attended the Governor’s School of the Arts and Humanities summer program in Greenville. There, the conservatory training revealed a totally new side of music.

“That was the first time I saw a full orchestra with strings and I was challenged to try my hand at conducting,” Young says. “During the five-week program, four students are chosen to conduct the orchestra. I was one of the finalists. The piece I conducted was Beethoven’s Second Symphony, the second movement. From that point on I knew this was what I wanted to do. At 16 I knew this was the career for me.”

The summer experience sparked an interest that quickly turned into infatuation. Young used his allowance to buy orchestral scores. He read books about the great composers. In his bedroom he played CDs, pretending to lead world-class orchestras.

“I remember listening to a Chicago Symphony Orchestra recording of Mahler’s Second Symphony. I didn’t have the score to read. I just listened, imagining that I was on a grand stage, leading a great orchestra in the performance of a great piece of music.”

One of the impediments to studying conducting is not having an orchestra at your fingertips. As a USC music major Young solved this dilemma with slices of pizza, using pepperoni and cheese to lure hungry music students to “impromptu” rehearsals to help
him improve his technique.

“I would ask about 100 or so students, especially string players. About half would show up. It seems pizza was always a big draw for students,” he says with a grin.

During those rehearsals, he worked through various compositions for about 30 minutes. Some students would leave early. Others would stay until the last slice was gone.

“Music students have crazy schedules and very little spare time. But my friends at USC were always eager to help me,” Young says.

Robert Pruzin was also instrumental in Young’s development at Carolina. Young met the late professor of music while at the Governor’s School. “From our first encounter he was hard on me. He pushed me to always do my best. He was determined to mold me into an excellent music educator.”

An independent study in composition rounded out his Carolina experience.

“Even though I wasn’t a composition major, professor Samuel Douglas welcomed me into his studio. I’m not a good writer at all,” Young says, “but this was a chance to go gain an appreciation for composing and to get into the composer’s mindset. This is important when you’re interpreting a score.”

The road to Atlanta

Young received a bachelor’s degree in music education in 2004. His journey to Atlanta was circuitous with stops in Upstate South Carolina, where he taught high school band; and California, where he met his mentor maestro Marin Alsop.

“I first met Joey when he attended the Cabrillo Festival Conductor’s Workshop, sponsored by the Conductors Guild,” says Alsop, the music director of the Baltimore Symphony Orchestra. “Although he had never conducted a professional orchestra, I immediately saw his talent and potential. I arranged for him to come to Baltimore and created a fellowship for him to study at
the Peabody Institute and work with me at the symphony.”

Other points along the way included conducting in Phoenix and Buffalo, with a stop in Bamberg, Germany, where he was named a semi-finalist in the 2013 Gustav Mahler International Conducting Competition, and recent guest engagements with
the Colorado Symphony Orchestra, the Tucson Symphony and the Spoleto Festival USA.

“I am very proud of Joey’s achievements to date,” adds Alsop, “and believe in him as strongly now as the day I first saw him conduct.”

Appointed after a highly competitive national search, his role in Atlanta is to conduct most of the orchestra’s education and community performances, like the one in the park. He leads the symphony’s youth orchestra, which showcases many of the city’s most talented high school musicians, and works closely with maestro Robert Spano, the ASO’s music director, helping to shape the organization’s overall artistic vision.

“First and foremost, Joseph is a superb musician and a very gifted conductor. When he steps on the podium, one sees immediately that he has strong musical ideas and that he can communicate those ideas clearly,” says former ASO president and CEO Stanley E. Romanstein. “He is, as well, an effective and engaging communicator of the program. When he speaks — to audiences, to students, to board members, to donors — Joseph has a style and manner that make people want to listen and to enter into conversation with him.”

Young says Carolina helped prepare him for this role. “The university was a proving ground for me,” he says. “I was tested in every aspect of my education. From playing in the marching the band, trying my hand at composing and singing in the choir to performing in the wind ensembles and student teaching, the university was critical in my development.”

“In looking for a successor, we were intent on finding a conductor who would both honor the youth orchestra’s distinguished history and traditions — maestro Jere Flint’s legacy — and, at the same time, raise the ensemble’s artistry and programming to even greater heights,” explains Romanstein. “We’ve been impressed with Joseph’s ability to strike just the right balance between honoring the past and creating an engaging and dynamic vision for the future.”

The arousing notes of John Philip Sousa’s “The Stars and Stripes Forever” mark the closing of a picturesque evening. And when Young encourages the audience to clap along, this is the queue to light sparklers, take selfies and celebrate America’s birthday as well as the arrival of Atlanta’s young maestro.