Into the stacks: Professor introduces students to rare collections 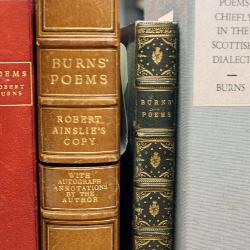 USC Libraries boasts an extensive collection of rare and special collections that scholars and students alike can use in research.

John Knox first set out to write his dissertation on British Romantic literature. He didn’t expect rare books and manuscripts in the University Libraries’ collections to influence his studies.

“Through my research on narrative poems, I’ve been forced to learn more about the Scottish School of Common Sense philosophy, and we have tremendous resources here for that,” says Knox, an English doctoral student in his fourth year at USC. “The collection was always of interest to me, but it wasn’t clear early on that it would play such an important role in shaping my dissertation. That connection has developed over the past couple of years.”

Tony Jarrells, an associate professor of English and an expert on Romanticism and 18th century Scottish and English literature, uses USC’s Scottish literature collection in his classes. During his classes, both undergraduate and graduate levels, Jarrells schedules time for his students to get to know USC’s collections.

“I’ll bring the class over to the library and have someone from the library introduce students to some of the great stuff that we have there,” says Jarrells, who is also the co-editor of Studies in Scottish Literature that’s housed at Carolina. “They’ll bring out things from our Scottish collection but also older printed books that we might be studying in an 18th century literature class so students can see what they look like.”

Jarrells says this kind of experience can be important for students to learn how to research texts and use primary sources.

“Students do a lot of work and studying in the library, using the spaces, but I think getting them into the stacks, into the special collections can show them that certain materials are available and that these materials are interesting projects in themselves,” he says.

Like Knox, Jarrells says the collection has influenced his scholarly work and his teaching in the classroom.

“In a class I want students to do their own research and this seems like a great place to think about getting them started,” he says. “Even if they’re not English majors or interested in Scottish literature, getting in and understanding what an archive is and what one can do with it is important. These materials are here and because they are here, I try to incorporate them more into my research, but also into my undergraduate and graduate courses.”

This week the university’s Scottish collection grew a bit more with the acquisition of Robert Burns’ poem “Flow Gently Sweet Afton,” written in the Scottish poet’s hand circa 1789. USC is home to more than 5,000 items including manuscripts, first and later editions of his poems, music, books about Burns – even his porridge bowl and spoon.

That collection has played a big role in Knox’s scholarly works and helped him find a niche in his field. This summer he plans to present at the first World Congress of Scottish Literatures in Glasgow on one of the university’s texts.

“Having access to materials that you can work with that a lot of people would love to see puts you in good position to establish yourself in the field,” says Knox. “For someone like me who is interested in Scottish literature, this is the best place for me to be.”