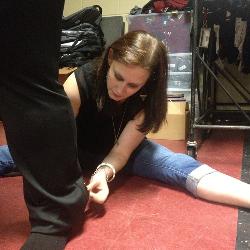 A stitch in time

When the Carolina Band takes the field, not only do they sound good they look good thanks to the needle-and-thread skills of Alexis Doktor, a Columbia costume designer, builder and seamstress.

"The last two weeks have been a complete blur," Doktor said in the weeks leading up to the first home football game. "There isn't a whole lot of time do what needs to be done before the first game."

In between learning new tunes, new marching formations and brushing up the alma mater and spirit songs, all 375-band members had their uniforms fitted, and if needed, altered.

And that's where her sharp eye and mad skills keep the band looking so good. Doktor altered nearly 150 pairs of uniform pants, each taking about 45 minutes to complete.

"From to start to finish," she explains, "the process comprises taking out the old hem and ironing out the old crease, then pinning the new hem and flattening the material with the iron, then hand stitching the hem and finally pressing the pants one last time." And since each band member has two sets of pants — one white and one black — it's done twice.

But wouldn't a machine speed up the process? Probably, according to Doktor. "I just choose to hand sew those because it is guaranteed to be a smoother and more clean looking finish," she explains.

"Alexis provides an invaluable service to the Carolina Band," says interim associate director of bands Jayme Taylor. "Her attention to detail and skill with garment alterations, not to mention her enthusiasm for the USC Band, keep us looking our very best."

But hemming pants isn't all she accomplished in the weeks before the season started. Both the color guards and Coquettes have new uniforms. Nearly all needed alterations or adjusting in one way or the other. Some changes were minor, like adjusting a strap. Others needed major fixes that required taking them apart and putting them back together.

Doktor studied fashion design at the Fashion Institute in New York City, and for a time, worked in several notable design houses creating bridal and evening wear on Seventh Avenue, among them Vera Wang. But it's no surprise that her career is in the arts. A former dancer, Doktor says her father was an internationally renowned violist and teacher at the Juilliard School, where he met her mother, who is in charge of human resources at the prestigious performing arts conservatory.

Doktor's specific interest in costuming happened while dancing. Fellow dancers noticed that her costumes were fitting better than theirs. "I was adjusting and altering my own costumes," she recalls. "When other members of the company noticed, they asked me to fix theirs. By the end of the season, I was working on everyone's costumes." That experience was followed by a full-time position at the Columbia City Ballet as well as freelance work designing, constructing and maintaining costumes for several Columbia-area performing groups, like Trustus Theater, the South Carolina Shakespeare Company and Opera at USC, a connection that led to working with the band last year.

"Last year was such a huge learning curve for me," she says. "This time is much easier."

It's not the most difficult work she's encountered over the years, Doktor says. But the volume of work and the short deadline are intense. "I've faced more challenging projects. The biggest obstacle is doing the same thing over and over again. I've had to come up with ways to keep it interesting. So, I'll hem a stack of white pants, then a stack of black pants just to change it up. I know it sounds weird, but the fabrics feel slightly different. So switching between the two, is like doing two different sewing jobs, even though it's not."

This season, as the Carolina Band, also known as "The Mighty Sound of the Southeast," entertains fans with music by Jefferson Airplane, Bruno Mars, The Beatles, Chick Corea and Chicago, each member is confident that every stitch is securely in place.