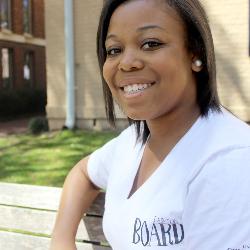 Brittany Terry belongs to an organization that prides itself on guiding students toward internships and jobs in prestigious companies in New York. As president of the UofSC Fashion Board, Terry’s love of fashion opens many doors. And whether she is sporting combat boots, Jack Rogers sandals, or a little black dress, she’ll be walking through those doors in style.

Terry, a junior fashion merchandizing major at the University of South Carolina, says her opportunities to work for big-name fashion houses was the result of her work with the UofSC Fashion Board, a student organization sponsored by the retailing department in the College of Hospitality, Retail and Sport Management.

She will be working this summer with People’s Revolution, a company founded by fashion industry superstar Kelly Cutrone. Last year, she worked as an intern with Hunter Bell apparel.

Since she joined Fashion Board in 2011, Terry has seen the group grow to a record 170 members, expand its philanthropic reach, and sponsor numerous events each year. But to Terry, Fashion Board means much more than just numbers. This group of like-minded students are making connections, enjoying experiences, and boosting resumes to impact their futures.

The Clover, S.C. native started as executive assistant her freshman year, became treasurer her sophomore year and now is president.

“I think holding different positions in Fashion Board has absolutely helped me now that I’m president,” Terry says. “Because I’ve already dipped my toes into all areas of Fashion Board, it’s a lot easier to help new officers in those positions.”

In addition to the contacts made that helped her get her internships, Terry says her time as Fashion Board president has improved her organizational and time-management skills.

Those skills will be tested this week. Monday, March 31, marked the beginning of the sixth annual Fashion Week event, a weeklong celebration of the fashion industry.

“Since we aren’t in New York City and don’t get to take part in fashion internships during the school year, it’s critically important that we sponsor an event that lets our members gain valuable experience in South Carolina,” Terry says.

Visit the Fashion Week website to find out about individual events.