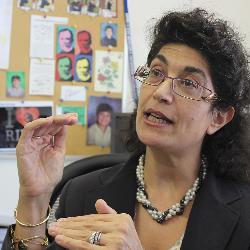 Riddle of the sphingosine

Carole Oskeritzian’s research group is working to understanding the central role in inflammation of sphingosine-1-phosphate, a lipid that is produced and acts as a signal when mast cells are activated during allergies.

Visitors overstaying their welcome are an annoyance, but in the human body an invited “guest” that just won’t leave can prove to be fatal.

Carole Oskeritzian, an assistant professor in the University of South Carolina School of Medicine, knows that firsthand. As a child growing up in Paris, she nearly died from asthma attacks and inflammation in her lungs.

The inflammation itself, she says, is a welcome guest at the site of injury — at least for a while.

“Inflammation is a set of events designed to protect us,” Oskeritzian says. “It is featured in allergic reactions, but also in infections, burns, wound repair and cancer. Any sort of disturbance usually triggers some inflammation at the site of trauma to defend the body against its propagation — trying to confine the problem, if you will.”

If the inflammation response is too strong or lasts too long, though, it becomes a problem that might be life-threatening or lead to chronic disease. When she experienced it herself as a schoolgirl with allergic asthma, Oskeritzian became curious. Why was she affected, but not her friends?

Doctors tried to help control her allergies with shots to desensitize her immune system to allergens. The vials containing the allergen extracts bore a portrait of Louis Pasteur on the label because they were manufactured at the Pasteur Institute. As a child, Oskeritzian resolved to someday work there.

That mission has been accomplished. She earned master’s and doctoral degrees and tenure at the Pasteur Institute in the Immuno-Allergy Unit, and later moved to the U.S. to expand her scientific repertoire. Her career has come along so well that her research group is beginning to develop a new approach to preventing chronic inflammation, and it involves a particular kind of cell she began studying in Paris.

During her graduate work at the Pasteur Institute, Oskeritzian met what she describes as one of the loves of her life: mast cells.

“Mast cells are present in every organ,” says Oskeritzian. “They are not in the circulation, but in the tissues, strategically located close to the blood vessels, waiting. They are a lot like sentinels, sensors of what’s happening locally.”

In response to many stimuli, mast cells can release a cocktail of proteases, cytokines, histamine and other chemicals, which, depending on their combinations, can either aggravate or resolve inflammation. Oskeritzian thinks that by modulating mast cell responsiveness, her team might be close to finding a way to shut down, or at least dampen, the inflammatory response.

Over the course of her career, Oskeritzian has studied mast cells from many perspectives. There’s a common molecule in every case that is now a central focus of her research: sphingosine-1-phosphate (S1P), a lipid that is produced and acts as a signal when mast cells are activated during allergies.

Prior to joining Carolina, Oskeritzian, together with Sarah Spiegel’s team at Virginia Commonwealth University, showed how S1P produced within the cell can be transported outside of it, affecting neighboring cells as well as the mast cell from which it originated. By establishing that S1P binds to receptors on the surface of mast cells and studying the consequences of such an interaction, Oskeritzian says her group now has important new insight into the early events that cause inflammation.

And with a clear understanding of what sets inflammation into motion, she thinks a solution could soon be at hand.

“We are not claiming that we are going to cure asthma or eczema, but I think that we may be able to prevent their occurrence,” she says. “Chronic inflammation always starts with acute inflammatory events, and we might be able to avoid it by understanding what happens early on.”

To learn how you can support groundbreaking research at the University of South Carolina's School of Medicine Columbia, visit Carolina's Promise.