Cocky for a Reason 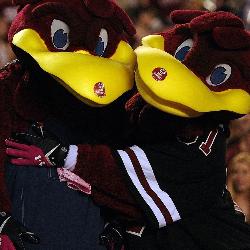 During James Armstrong III's four academic years at Carolina, he was more than a student— he was Cocky.

In and out of costume, James Armstrong III is cocky. The man behind the suit is just as proud to be a Gamecock as the dancing bird you see at football games. After graduating this spring, he decided to hang up his mascot suit, but his time at the university is far from over.

When asked how to become Cocky, Armstrong simply, sarcastically, and forever sworn to secrecy says, "There's no audition process, you just hatch." Armstrong's spirited personality and quirky love of the spotlight can only be explained by something that wasn't developed. Perhaps his personality hatched, too.

Beginning in high school, Armstrong begged to be the school mascot. He was known for parading his chicken suit he bought for fun around his Virginia high school.
During his first semester at Carolina, Armstrong ran into Cocky at the Strom Thurmond Wellness & Fitness Center pool. As Cocky antagonized some tanning students, Armstrong played along. He even admitted to the bird costume, "I want to be you." Silently, Cocky wrote down an email address for Armstrong and a few months later, the freshman had the job.

Scheduling around a secret

Armstrong fully embraced his role as Cocky, but his promise to keep his identity as Cocky a secret became difficult, the more he got involved on campus.
By graduation, Armstrong had served as a resident mentor, Student Government officer and cabinet member, as well as a member of the Dance Marathon morale team, My Carolina Alumni Association and Sustainable Carolina. He had to pick and choose which time commitments required letting his peers know his secret and which ones he could balance without saying a word.

Armstrong opened and performed at the first half of football games his senior year, and was responsible for the spirit at four other Gamecock sports. He earned the title of Senior Cocky.

"I basically helped communicate with the other birds," Armstrong says.

The reason for the spirit

The kids that Armstrong met at events were the real motivation and passion behind his time as Cocky.

"You find out the magic of kids when things go wrong," he says. "Kids can teach you a lifetime of knowledge without words."

Cocky visited hospitals, schools, weddings and community events. As Cocky, Armstrong even attended funerals of fans with whom he had a special bond. Families wishing to celebrate their loved ones lives knew Cocky would bring the warmth they needed on that day, and James was happy to bring it.

Meeting Bennett, a Ridgeway, S.C., baby who was only given a few months to live, gave Armstrong, and Cocky, a glimpse into who they were- off the field. Knowing Bennett would never be able to come to a game, Cocky helped fulfill a bucket list wish for the family¬– meeting the infant in his home. He played games and took pictures with him and his family.

"I remember being so glad I had a mask on because I was crying behind the suit," Armstrong says. "I'd stepped out in front of 80,000 people, met the governor, been in big productions, but as I prepared to meet that baby — that was the most nervous I had ever been."

Baby Bennett was Armstrong's inspiration to raise $1,300 for the Palmetto Children's Hospital during the university's Dance Marathon. Bennett passed away at 13 months old – just days before the event. Cocky encouraged the crowd to dance to save kids like Bennett in the morning at the Dance Marathon, then supported his family, later that day, at Bennett's funeral.

"Bennett was the best and most difficult part about being Cocky. I grew a lot and learned to live each day like it's my last – no excuses."

Cocky's Reading Express and beyond

Armstrong found a passion and ultimately a career path during his time in the suit. One of Cocky's most coveted roles is visiting local elementary schools, working to improve child literacy. As a student director of Cocky's Reading Express, and the face of the event, Armstrong loved watching kids' faces light up when they received a book or made the promise to read each day.

"Kids get so excited. They don't care what team I'm from. It transcends sports," Armstrong says.

Armstrong may be changing out of his Cocky uniform, but he will keep his garnet ties, working toward his master's degree in Library and Information Science and as an intern for My Carolina Alumni Association.

"You can't get rid of me that easily. I have a lot up my sleeve, a lot more to do to make this school, state and country a better place," he says.

One of his goals is to extend Carolina's reading program nationwide.

"I think it's such a great model that could be implemented across the country. Even with other university's mascots," he says.

He also is working to create a Cocky Alumni Association, keeping former mascots close to the university and the Gamecock family.

One of his final appearances came in May when he walked across the stage, Cocky feet and black gown, and graduated with leadership distinction — all James and all Cocky. One is not without the other and that's how he plans to move forward.

His memories at the university are many, but those where he felt like it was impacting even a little piece of his world are the ones he'll treasure most.

"It's amazing. Different clothes, different shoes, a furry chicken suit, and I was able to change the world," Armstrong says.