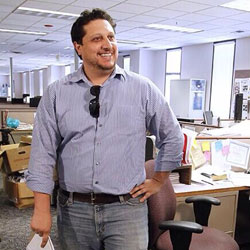 Michael LaForgia receives word that he and fellow reporter Will Hobson have won the 2014 Pulitzer Prize for local reporting.

University of South Carolina alumnus and Tampa Bay Times investigative reporter Michael LaForgia, '05, knows what it feels like to chase the big important story. He also knows how it feels to see the hard work pay off.

As a result of that investigation, which spanned roughly five months from July 2013 to the end of the year, program employees were fired or resigned, and the program itself was shut down. LaForgia and Hobson, for their part, enjoyed a career-defining moment few reporters ever experience.

"We were very pleased," says LaForgia when asked how it felt to bring home the Pulitzer. "It's very difficult to put into words, but it's exhilarating and scary and humbling all at the same time."

But developing a single take-down story of one crooked landlord into a months-long investigation that brought down an entire program and secured the reporters one of journalism's top prizes took legwork, teamwork and plain old-fashioned work work, the kind of midnight oil drudgery that's anything but glamorous.

"We were doing 10- and 12-hour days, every day, including weekends, for about two to three months," says LaForgia. "There were moments in the middle where it was the opposite of exhilarating. It was just this massive slog. But we never had to question if this was an important story worth doing. That sort of kept us going."

In addition to interviewing dozens of landlords and dissatisfied tenants about the housing program's unsanitary and often dangerous living conditions, he and Hobson scoured thousands of pages of emails and police reports to corroborate the horror stories they were hearing.

"Once it became clear that this was a widespread practice, and that there were plenty of people out there profiting by housing the homeless in substandard conditions, at that point, it was clear this was a pretty important story that needed to get done," says LaForgia. But the two reporters can't take all the glory. LaForgia also credits another Carolina alumnus, project editor Chris Davis, who graduated with a degree in journalism in 1994, for helping to steer the series over the long haul.

"Right now, he's probably one of the best investigative project editors in the country," says LaForgia, citing multiple blockbuster stories that Davis has helped shape into Pulitzer Prize finalists at the Tampa paper and elsewhere.

LaForgia, a former two-term editor of the Gamecock (now the Daily Gamecock), also credits his recent success to his own experience with student media while an undergraduate at Carolina.

"Are you kidding me?" he says when asked about the value of his time running the university's student newspaper. "There's no way I'd be a reporter if it weren't for the Gamecock. I didn't study journalism. I was an English major. I didn't really plan on going into journalism. I signed up for the newspaper after attending an interest meeting, sort of on a lark, and that was it."

Michael LaForgia credits his work with the Gamecock student newspaper with helping him start his career in journalism. Learn how you can help support the Daily Gamecock and other student programs by visiting Carolina's Promise.