Up, up and away 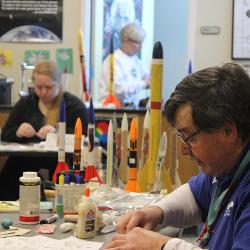 USC Upstate adjunct professor Ed Donovan uses model rockets to get students excited about science, technology, engineering and mathematics. He has taught students and teachers at just about every level in a more than 45-year career, and model rocketry has never failed to motivate them to learn STEM concepts since he incorporated it into his many curricula.

When you spend a couple of hours carefully constructing an object made mostly of paper, balsa wood and glue, the furthest thing from your mind might be to attach a pyrotechnic engine to it and send it flying off at a few hundred miles an hour. But that’s just what students in one of USC Upstate adjunct professor Ed Donovan’s class did at the end of last semester.

It was all in the name of science, though. Or science, technology, engineering and mathematics, that is. Donovan, who has taught elementary and higher-level students and their teachers in these areas for several decades, has found a sure-fire way to get kids excited about things like mass and acceleration, geometry, space exploration, calculus and STEM careers. He shows them how to build and launch a model rocket.

For those unfamiliar with the hobby, here’s a quick primer. Using one of many kits available online and in hobby shops across the country, you can construct a miniature rocket that is flight-ready. The simplest models are typically composed of a cylinder made of a heavy paper, balsa wood fins for aerodynamic stability, a nose cone and an engine holder.

Also available are standardized single-use engines (containing a solid propellant similar to that found in some fireworks), small launch towers, and an electrical launch device that allows you to ignite the engine from a safe distance and watch as the rocket climbs 1,000 feet or more in just a few seconds.

Donovan became interested in model rocketry as a teaching tool while living on America’s “Space Coast” 35 years ago.

“My wife and I moved to Florida so I could work on my doctorate in science education from Florida Institute of Technology, and it was there that I started using model rocketry because we were near the Kennedy Space Center and the influence of NASA,” Donovan says. “I think I did my first rocketry workshop in 1980, and I’ve been doing them ever since.”

In a wide-ranging career that includes teaching at the elementary, secondary, high school, undergraduate and graduate levels, Donovan has taught students of science and those intending to be the teachers of those students. And model rocketry has never failed to get the attention of his charges.

The adventure can be highly educational, too. It’s a perfect hands-on building activity for students as young as fourth grade or so, Donovan says, and the sky is the limit for science concepts that are involved in the experience.

“With rocketry, you’re doing science, engineering, math, technology — all of the STEM areas. You’re teaching about safety, and in 35 years I’ve never seen any kind of injury. It’s very safe if you follow what’s called the model rocketry code,” Donovan says. “You have to learn about rocket recovery systems — most of the model rockets use parachute recovery systems, which NASA also uses.”

“With high school seniors we’ve done calculus. I would have kids build a device called a height-o-meter that allows them to estimate how high the rocket goes — you can get into trigonometry there. And in addition to all of that, you can use it to teach Newton’s Laws of Motion.”

Just before the holiday break, 20 students in Donovan’s “Teaching Science in Elementary School” class each built and launched an “Alpha” rocket, which flew to about 1,200 feet, Donovan says. As in the dozens of teacher workshops and countless classes he’s taught, model rockets were a big hit.

“The students just love it,” he says. “I’ve never seen anyone who didn’t like building and then launching a rocket. It’s an exciting adventure.”