Pioneer behind the lens 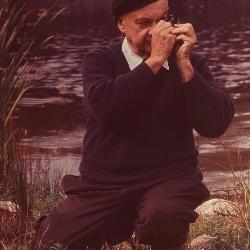 An exhibit highlighting Roman Vishniac’s work is open to the public 8:30 a.m.- 5 p.m., Monday-Friday, at the Hollings Library until Jan. 31. Moving Image Research Collection curator Amy Ciesielski will give a gallery talk and informal tour of the exhibit, which incorporates the library’s new multimedia digital exhibit infrastructure, at noon, Friday (Jan. 16) and at noon, Saturday (Jan. 17.)

Roman Vishniac may not be a household name, but he was a highly influential photographer and filmmaker of the 20th century. And it’s the University of South Carolina’s good fortune that one of its own seized a serendipitous opportunity to persuade his daughter, Mara Vishniac Kohn, to donate an invaluable collection of her father’s work to the university’s Moving Image Research Collections in 1994.

Born in 1897 in czarist Russia, Vishniac is widely known for his photographic chronicling of pre-Holocaust Jewish life in 1930s eastern and central Europe. In 1983, selections of this work were published in a popular book titled “A Vanished World,” which included a foreword by Elie Wiesel.

This past summer, a digital archive of more than 9,000 of his photographs was made available to researchers and the public by the International Center of Photography and the Holocaust Memorial Museum.

But there’s another side altogether to the man. He received a camera and microscope for his seventh birthday and spent a lifetime learning how best to use photography and microscopy in tandem. With his artistic vision, graduate-level education in biology and detailed experience with the camera, Vishniac produced numerous professional photographs and films of the minute living world.

Helping prepare classroom science films such as “Protozoa” and the National Science Foundation-funded “Living Biology” film series, Vishniac was a pioneer in the fields of photomicroscopy and cinemicroscopy.

“A lot of what he did has become so standard that most people don’t even know about him,” says emeritus biology professor John Herr Jr. “And he showed a flair for technique, such as photographing his daughter through the multifaceted eye of an insect.”

Vishniac broke ground with his work, Herr says, and its historic value is both priceless and often underappreciated.

“One of my colleagues once said, ‘Well, I'm not much interested in that because I can do much better watching the Discovery channel,' ” Herr says. “Well, he had no sense of history — many biologists don’t.

“It’s like saying ‘I’m not much interested in the Edison light bulb, I like to get the kind you can go to Lowe’s and get.’ It’s about the same kind of attitude, knowing that the Lowe’s light bulb wouldn’t be there without Edison’s light bulb.”

As president of the Appalachian Regional Microscopy Society, Herr learned from one of its members a few years after Vishniac’s death in 1990 that his daughter, Mara Vishniac Kohn, was looking for an archive to which she could donate her father’s biologically related work.

He found her number and called her out of the blue, introducing himself and saying, “I’d like to see you give this to USC,” Herr recalls. “And she was very happy to hear from me. ‘I have been trying to give this to USC forever,’ she told me.”

One thing confused her, though. “She asked, ‘how are you the president of the Appalachian Regional Microscopy Society if you’re here on the West Coast?’ ” Herr recalls. “I told her, “I think you’re talking about USoCa [you-sew-kuh]. I am from USC. This amused her greatly, and we got to talking and she said, ‘Well, I have been working with USoCa for quite some time and they don't show any interest in this, so if you believe USC would like to have that, then I'll contribute it.’ ”

A crucial reason for her donation, Herr says, was that Carolina was also home to the Newsfilm Library, the forerunner of what is now Moving Image Research Collections, which housed the Fox Movietone News collection.

“The fact that we’ve got quite an important film library here impressed her,” Herr says. “That was really what convinced her to donate.”

With more than 150,000 feet of film and 800 stills, the Vishniac collection is the cornerstone of MIRC’s Science and Nature Collections. Southern California’s loss has been South Carolina’s gain.

To learn how you can help support the collections at the University Libraries, visit Carolina's Promise.