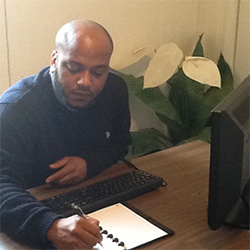 As a fellow in a partnership between Temple University and pharmaceutical giant Merck, Kelly Johnson works with a team that helps countries lacking access to a vaccine develop a cost-effective plan to bring it to their citizens.

One thing that Kelly Johnson truly appreciates about epidemiology is the range of career choices that his doctorate in the field has afforded him.

“You can really work with many different diseases,” he says. “You can function in HIV, or you can do straight cancer or diabetes. So if you find a disease that you’re interested in, you can focus on that throughout your whole career or you can always switch — that’s how easy it is in epidemiology to do different types of research.”

His young career exemplifies that versatility. From working on HIV/AIDS research as a graduate student in the Arnold School of Public Health, he moved on to the vaccines group at pharmaceutical giant Merck after graduating in 2013 and now works primarily with the company’s shingles vaccine.

“I do like the fact that I am working on the shingles vaccine because we all have had chicken pox,” says Johnson, who earned a Master of Public Health degree at New York Medical College before coming to Carolina. “Well, not quite all of us, but everyone who has had chicken pox has the latent virus and can get shingles later in life.”

It’s a worldwide problem, and Johnson is doing his part to help bring the vaccine to places where there is no current access. And the work gives him the opportunity to grow as a scientist.

“We work with different countries that want to bring on the vaccine. We do research studies in those countries to see what the burden of the disease is — that’s where epidemiology comes in,” he says. “Then we also look at how cost-effective the vaccine would be, the budget impact of bringing the vaccine on. It’s a health economic analysis, which I hadn’t really done before, but now I have plenty of experience with it.”

Finding new experiences is the hallmark of his research track. His dissertation involved a disease for which there remains no vaccine, HIV/AIDS. He published a paper based on his doctoral work this past June, looking at the association between a patient’s body mass index (BMI) and the rate at which HIV progresses over time.

It’s an area that has needed new studies, he says, because things have changed quite a bit since the early days of treating the disease. With the advent of widespread use of antiretroviral drugs in the mid-1990s, mortality has decreased, but one consequence of that is a large change in the range of BMIs of HIV-positive patients.

They skew much heavier now, Johnson says, and being heavier had been shown earlier to perhaps be a positive thing.

“Before I did my dissertation, past research showed that people who were heavier had slower progression of the disease,” Johnson says. “When I say slower progression, I mean they had higher CD4 counts and lower HIV viral load counts, which tends to mean that it takes longer to go from HIV to AIDS.”

Johnson subdivided heavier patients further, showing that there’s a limit to how many extra pounds might be beneficial for an HIV-positive patient.

Parsing the fine details of what helps bring about a better outcome, whether for an individual HIV patient or for an entire country in its approach to vaccination, is perhaps one theme that has been a constant in Johnson’s work so far. And now that he works for Merck's Global Health Outcomes division, he plans to stay with the field going forward.

“This is definitely the area where I want to make my career,” Johnson says. “I feel like I can make a difference here, and make a name for myself in this industry.”

To learn how you can help support graduate student research like Kelly Johnson's work at the Arnold School of Public Health, visit Carolina's Promise.