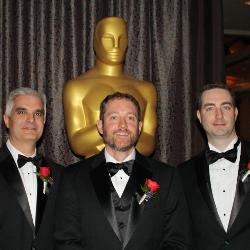 Three Carolina alumni received an Academy Award this month for their innovative software that creates virtual environments for movies and video games.

The next time you marvel at the natural-looking forest in a movie or the realistic environments in a video game, you can thank Michael Sechrest and Chris King.

And you won’t be alone. The movie industry just thanked them, too — with an Academy Award. In fact, their work prompted the academy to create a new category. For these University of South Carolina grads, it was unfamiliar territory.

“We felt like David facing Goliath during the intense academy investigations that kicked off in September,” says King, who along with Sechrest founded Interactive Data Visualization Inc. and developed SpeedTree®, software that helps create the rich environments in movies — about 40 so far, from "Avatar" to "Godzilla" to "Maleficent" — and in more than 1,000 video games.

When they were nominated, they stood alone in the category for digital vegetation. “Then they made a call out to the visual effects world for similar work,” King explains. “Out came Disney, DreamWorks, Weta Digital (The Lord of the Rings and Hobbit movies, and new Planet of the Apes movies) and another company similar to ours.”

But IDV and DreamWorks came out on top. King and Sechrest, along with senior software architect Greg Croft, another Carolina grad, received a Scientific and Technical Award at a ceremony in Beverly Hills on Feb. 7. (Watch their shoutout to the Gamecocks.)

And don’t think the Sci-Tech Awards were boring just because they focus on behind-the-scenes work. “From the hosts down to the event staff, everyone made what could have been a dry evening of technical jargon into a light-hearted celebration,” Sechrest says. “The event lasted six hours from cocktails to closing remarks, and it felt like 30 minutes.”

Beverly Hills may be a plane flight away, but their journey to the Oscars started after earning master’s degrees in computer science and engineering more than 15 years ago. The two stayed on at the university as adjunct instructors and research engineers, focusing primarily on visual simulations and real-time graphics.

After much consideration and encouragement from others, however, King and Sechrest decided to start their own company. Soon, IDV earned one of the first spots in the USC/Columbia Technology Incubator, which fosters start-up companies that work with university faculty and students.

Over the years, the company has created more detailed refinements to its software offerings. Better wind simulation adds to an environment’s realism. Even the effects of ambient light and light sources on individual trees are taken into consideration.

Developing and enhancing SpeedTree has been a long, ongoing process, one that Sechrest once considered “a long-shot side project,” but it has proven wildly successful. And now they’ve got an Academy Award to prove it.