The benefits of belonging 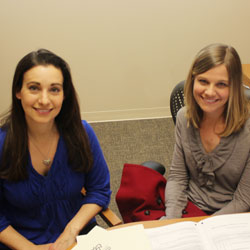 Belonging to a group can be good for your mental health, say public health researchers Maggi Miller, left, and Holly Pope. But there have to be certain qualities of the group's interactions for there to be any benefit.

It’s common knowledge that people suffering from addiction and isolation often find healing in recovery groups such as Alcoholics Anonymous.

The key is meeting regularly and, more importantly, having a willingness to share openly — dynamics that also are at play in many ordinary civic or church groups. Based on a large study of individuals in such groups, an interdisciplinary team of University of South Carolina researchers has created a questionnaire that can measure these dynamics and their association with better mental health.

“Just because you’re in some type of group doesn’t necessarily mean that it’s going to be beneficial to your health,” said Holly Pope, director of evaluation for the Center for Research and Nutrition in Health Disparities in the Arnold School of Public Health and a member of the original research team.

“To have a positive effect, there have to be certain qualities in a group’s interactions that build trust and reciprocity of support, whether it’s a book club, an AA meeting or a prayer group.”

“Maggi and I went to all corners of the state, wherever people gathered — laundromats, convenience stores, churches, flea markets, restaurants, bingo parlors — to find people willing to talk to us about their experiences in groups,” she said.

They interviewed scores of people who belonged to church, community and service groups as well as some who didn’t belong to any groups. They began to theorize that the trust each person felt and the give and take they experienced in groups creates social capital.

“Social capital is like a tangled mess of spaghetti — it’s the benefits that people derive from being part of a group. Our job was to untangle and measure those strands of social capital to see how they related to mental and physical health,” Pope said.

After rigorous analysis of the interviews, the research group  developed what became the Relationships in Community Groups questionnaire.

“That questionnaire has been validated, so it can be used by community researchers to measure the quality of relationships in community- and congregation-based groups and investigate if participation in these groups is associated with positive mental health outcomes,” Miller said.

Several scholarly papers have resulted from the project, but another, more organic, benefit was derived from the study, Pope said. During the two-year course of the project, she and Miller met with faculty members on the steering group on a regular basis.

“A lot of what we were seeing in the field we saw in the dynamics of our own research group,” she said. “I felt like as a grad student I was treated as an equal and they truly valued what I had to say.

“It set the tone for my career. I saw the importance of valuing each other as equal members of the team and realized that it’s most beneficial to the work when there is a high level of trust and a spirit of cooperation.”