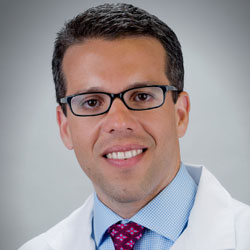 Dr. Fernando Navarro at the university's School of Medicine is a fellowship-trained minimally invasive surgeon.

But with three tiny incisions on Galloway’s back, a surgeon removed a benign tumor on the left adrenal gland, which had been causing Galloway’s uncontrollable blood pressure. With the tumor gone, so, too, were many of his medical problems.

“The doctor was excellent, and everything went smoothly,” says Galloway, a retired electronics technician for AT&T who had the surgery this past May. “I’m down to three medications and my last blood pressure reading was 130 over 84 — normal.”

For example, routine cholecystectomies (gall bladder removal) used to require a long abdominal incision and a weeklong hospital recovery. Laparoscopic surgery, which became mainstream in the 1990s, removes a gall bladder with three or four half-inch incisions that accommodate surgical instruments and a miniature video camera.

In the past dozen years or so, robotic surgery has brought further improvements that allow surgeons to use a console to manipulate surgical instruments that are more articulated and agile than a surgeon’s own wrist and hands. Navarro can now use robotic surgical equipment to remove a gall bladder through one small incision at the belly button.

“Robotic surgery gives you a 3D-view so it can be safer, and the arms of the robot allow you to work in a small space, such as the pelvic cavity and the esophogeal hiatus,” Navarro says.

“Some say robotic surgery is not much different — in terms of health outcomes — than regular laparoscopic surgery, but it’s here to stay,” Navarro says. “And in more and more types of surgery, going robotic can be advantageous because the equipment allows you to visualize and manipulate the patient’s target organ in ways never seen before.”

Many surgery residents want to do robotics, and many of the minimally invasive fellowships like the one Navarro completed include robotic surgery components. The bottleneck lies in learning how to do each procedure.

“The learning curve with robotic surgery depends on the type of operation,” Navarro says. “With some surgeries, you might need to do quite a few under supervision before you become proficient.”

What’s next? Identifying more types of surgery that could be carrried out with single-incision, robotic procedures is on the horizon. But far more bold is the concept of remote, computer-assisted robotic surgery in which the surgeon could be miles from the patient and the operating room, manipulating the instruments via high-speed communications connections. An actual example of that was successfully conducted in France several years ago.

The U.S. military, under the Defense Advanced Research Agency, is especially interested in the possibility of treating wounded soldiers in the field with medical personnel located in safe zones. All of that might be fascinating, but Navarro is focusing his interests closer to home.

“We get three new residents every year, and I like working with them. We sharpen each other,” he says. “It’s a win-win situation.”