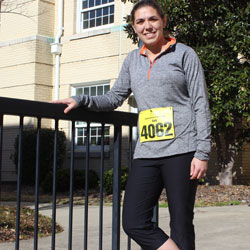 Civil engineering graduate student Sally Bartelmo, who only ran her first marathon in 2012, is now on a quest to run 50 marathons in 50 states.

Sally Bartelmo is off and running — in more ways than one.

It’s what Bartelmo does in her spare time, though, that has her colleagues talking. Bartelmo intends to run a marathon in each of the 50 states — plus Washington D.C. — before her 30th birthday. “And if I can do it sooner, I’ll do it sooner,” she says.

With 13 marathons and nine states already underfoot, including the Big Wild Life marathon in Anchorage, Alaska, which she ran last August, she’s well on her way. She completed two marathons in a single weekend at the start of 2015 and plans to run the famous New York City marathon later this year. She hopes to cross off N.C. in the coming months as well.

That’s a big step — several thousand of them, in fact — for someone who didn’t run her first marathon until 2012. But the Rock Hill native has plenty of inspiration, starting with her father, who died of heart attack while running in 2010.

“And it’s kind of ironic,” she adds, “because my dad used to drag me along sometimes when he’d go running, and I’d complain the whole time!”

But she kept running — and came up with her goal of 50 marathons in 50 states (plus Washington, D.C.) — because it feeds another big passion, her lifelong love of travel.

“I’ve been able to travel around the country and see so much stuff that I’d probably never otherwise see,” she says “And then, when you’re running, you end up talking to different kinds of people that come from all over and have all these different backgrounds. I love hearing all their stories.”

The Alaska trip has been her favorite so far, she says, but her favorite race has been the Chicago Marathon. Asked why, she laughs, revealing one more factor motivating her to cross the finish line.