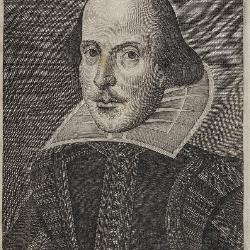 "First Folio! The Book that Gave Us Shakespeare" is a traveling exhibition from the Folger Shakespeare Library, in partnership with the Cincinnati Museum Center and the American Library Association. It will make a stop next year at UofSC.

On a recent visit to the Folger Shakespeare Library in Washington D.C., Robert Richmond had the opportunity to see a First Folio, the first collected edition of Shakespeare’s works published in 1623.

“Seeing it there live, so close you can almost touch it, allows us to understand it was revolutionary,” said Richmond, a University of South Carolina associate theater professor. “It’s incredible to look at these words and realize this has really changed the way we think and philosophize. It’s less about the plays and more about the humanity that’s inside of those covers.”

Others will soon have the same chance to be that close to the revolutionary text.

The University of South Carolina was chosen as the only display site in the state for the 2016 traveling exhibit of “First Folio! The Book that Gave Us Shakespeare.”

Richmond, who also is an associate artist of the Folger Shakespeare Theatre in Washington, D.C., has been commissioned to adapt a show to accompany the First Folio on its tour. It’s just one of the many opportunities planned around Columbia that will allow visitors to connect with Shakespeare in a new, deeper way.

“The exhibit will be the occasion for programming about both Shakespeare’s book and the enduring impact of the book and the plays,” said Ed Gieskes, an associate professor of English who teaches Shakespeare to UofSC undergraduate and graduate students. “We will showcase other parts of our library’s collection of rare books, the theater program will provide performances and we will be able to reach out to the community with this opportunity to see one of our most influential books.

“As a teacher of Shakespeare, I envision the exhibition as a way to demonstrate in tangible ways the impact and legacy of Shakespeare,” Gieskes said. “Having a folio in the library with the Folger’s display as well as those from the rare book collection represents a material way to engage students with the plays outside the classroom. The folio’s presence here will help to show just how much Shakespeare is with us all the time.”

Published seven years after his death, “Mr. William Shakespeares Comedies, Histories, & Tragedies” — now known as the First Folio — was the first folio book ever published in England that was devoted exclusively to plays. Of the plays written wholly or partly by Shakespeare, 18 have survived only because they were published in the First Folio.

When the First Folio arrives in Columbia, its pages will be opened to the most-quoted line from Shakespeare, “to be or not to be,” from “Hamlet.” Accompanying the book will be a multipanel exhibition exploring the significance of Shakespeare with digital content and interactive activities.

“Having a First Folio come to Columbia provides an exciting opportunity to bring Shakespeare to life for a South Carolina audience. Even many of those who have studied the Bard have never seen a First Folio,” said Tom McNally, dean of University Libraries. “This exhibit not only celebrates the 400th year of Shakespeare's death, it offers the opportunity to learn why Shakespeare is known to us all as the greatest writer in the history of the English language."