Creativity has no bounds 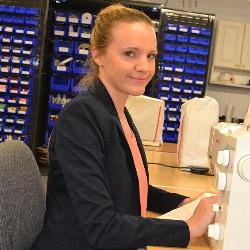 Since arriving at the University of South Carolina, Vera DuBose has spent plenty of time roaming the aisles of hardware stores. This may seem a bit odd for a costume designer, but for DuBose it’s unconventional problem solving. “Theatre is thinking outside the box,” says the graduate design student, who is just as comfortable around plumbing accessories as she is around bolts of silks, muslin and crinoline.

A native of Germany, DuBose says her life has taken many turns. She studied dance at a top conservatory, and when that didn’t work out she earned a biology degree. But life in a laboratory didn’t suit her. Then the elaborate costumes featured in the 2006 film “Marie Antoinette” prompted her to earn a second degree in costuming.

Since coming Carolina to earn a master of fine arts in costume design, her work has been showcased in Anton Chekov’s “Three Sisters,” staged by Theatre South Carolina and “Fusions,” a performance installation conceived by UofSC theatre professor Nic Ularu.

“Fusions,” which was presented at the World Stage Design conference in Wales, remains one of the most challenging projects of DuBose’s design career so far. “We knew the show was going to Great Britain. This added a new set of obstacles,” she explains. “Primarily, designing costumes to fit inside suitcases.” One piece, a garment that had a large “belly” about three feet round, was particularly hard to construct.

“We considered lots of options,” she says. "The idea of making something that could fold into itself seemed to be the best approach, we realized that paper lanterns, accordions and hoop skirts functioned that way.

“I actually tried using a paper lantern,” DuBose says, “but realized that it was a ridiculous idea. It just didn’t work on any level.” She discovered that lanterns have metal devices that force them to open and they don’t “fall” into shape by gravity. What’s more, the paper material is too fragile.

Using the lantern idea as a starting point, she designed a round collapsible garment using crinoline and thin plumbing tubes that she purchased from Lowe’s. “I went to several hardware stores to buy enough tubing to make the belly,” DuBose says.

But once completed, it still wouldn’t fit inside a suitcase. She ended up carrying it in a box. “I was asked several times by airport security what I was transporting,” DuBose remembers with a laugh. “But we got through without any trouble. They were very nice about it.”

Using unconventional material is what makes theater design exciting for her. “I think design is more than copying real life. Design should go beyond that,” she says.

In recognition of her work, DuBose’s designs will be exhibited at the Prague Quadrennial of Performance Design and Space this summer. Held every four years, the exposition is the largest scenography event in the world that explores technical theater practices – from stage and costume design to lighting and sound design.

In addition, Xuemei Cao and Meredith Paysinger Hart, two other UofSC MFA graduates, will have their design work displayed at the conference.

“This is a tremendous honor, not only for Vera and her fellow classmates, but also for USC," says Lisa Martin-Stewart, chair and co-artistic director of the Department of Theatre and Dance. “The Prague Quadrennial is like the 'Olympics' of the theater design world; only the very best artists are invited. Vera is an extremely talented costume designer and has worked very hard over the last three years. The theater faculty is very proud that Vera and her peers will be representing our design program at such a significant international event.”

As she completes her final year of study, DuBose has plans to return to Germany where she will intern at the Hamburg State Opera House. “Of course, I’m looking forward to going home," she says. “But I’m also hoping to build bridges with the design community there, in hopes of finding more opportunities to think beyond the conventional.”