Print that: Bringing lessons to life in 3D 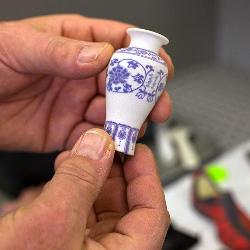 Faculty can learn about the university's wide range of 3D resources at the 3D Expo on Friday (March 20) at IT-ology.

Students in Carlina de la Cova’s anthropology classes learn best when they can touch and hold artifacts and bones they are discussing in class. The problem is those artifacts are rare, sometimes one-of-a-kind links to the past that may not fare well with excessive handling.

The solution? Recreate the artifacts on a 3D printer, including the wear and tear of being in the ground for hundreds or thousands of years.

“When we’re teaching our introductory labs, we’re hesitant to use real bone because we know accidents happen and things break,” says de la Cova, a professor in anthropology and African American Studies. “So we use a lot of plastic bones and casts. But with those, you get these extremes: ‘This is what tuberculosis looks like.’ You don’t get the subtleties that you see before the extreme happens.”

De  la Cova is currently studying bone fractures and examining the differences between those that occur shortly before an individual’s death, known as perimortem fractures, and those that happen after death, referred to as postmortem fractures. It can be difficult to tell the difference at a dig site, especially when a body has been buried for over 100 years and exposed to many natural processes.

“It’s hard to find examples or casts of perimortem fractures,” she says. “So being able to print them up, not only for my research, but to share them with the students as well, allows me to bring my research into the classroom.”

De la Cova is one of about a dozen University of South Carolina professors who were part of a grant proposal to create a 3D print bureau for all university faculty members to use.

John Gerdes, a professor in the department of integrated information technology at the College of Hospitality, Retail and Sport Management, says the 3D Modeling Service Bureau is just part of the university’s 3D offerings for faculty. A 3D expo will be held Friday (March 20) at IT-ology to introduce faculty to all the available resources they can use in their research or classroom work.

“This is really cool stuff,” says Gerdes, who is in charge of the 3D print bureau. “A key use is for prototyping and visualization. If you have a concept of an idea that you want to communicate to someone else, you can draw it on a piece of paper, or you can actually print it and they can hold it in their hands and see exactly what that part looks like.”

Gerdes says the printer offers faster reproduction or creation of a proof-of-concept model than a classic machine shop – and does it at a fraction of the cost, about $15 per cubic inch.

“To make a one-off production model, it may be thousands of dollars, whereas with 3D printers you get it in a day and the cost is much less,” he says. “3D printing is often used in industry for this very reason.”

Gerdes says another example might be to print out a 3D model of ancient pottery or other artwork that could travel around to local schools. "You could have museum-quality art that students could touch and physically experience," Gerdes says. "And if they drop it, it's not a big deal."

The 3D Expo will be held 9 a.m.-4 p.m. Friday (March 20). Presentations will include John Gerdes’ explanation of the services offered by the 3D Modeling Service Bureau; Elise Lewis’ discussion of 3D laser scanning; David Rocheleau’s talk on his 3D research; and Kevin Hunter’s presentation on the practical applications of 3D printing. Get your free ticket at the event website.