A career across the campuses 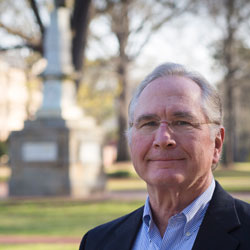 Stay calm and carry on

Chris Plyler's unflappable style has been a hallmark of his 37-career at the university.

A compass would have been handy for Chris Plyler during his 37-year career at Carolina, which initially took him south to USC Salkehatchie, then west to USC Aiken, east to USC Beaufort, and, finally, north to the flagship campus in Columbia.

But it was his own unflappable style and calm leadership that helped Plyler map out the best methods for educating students across the university system.

"Helping students who didn’t have the financial means, the first-generation students, kept me going,” said Plyler, executive vice chancellor of Palmetto College and vice provost, who grew up in Columbia, attended Clemson University and later earned a master’s degree from Carolina and a doctoral degree in higher education leadership from Florida State.

“When you go to commencements at the regional campuses, you see all these students getting their tickets to a better life,” he said. “Witnessing their achievements always helped me to remember why I loved working for the university.”

After nearly four decades of university service, Plyler is readying for retirement at the end of March and reflecting on the career that began in 1978 when he began as assistant dean for student services at USC Salkehatchie in Allendale, S.C. His paycheck stayed the same, but he got a bigger title — associate dean — during his four years there.

“I’ll always be grateful to Dean Carl Clayton for the opportunity at Salk,” Plyler said. “I was eager to get back to South Carolina after finishing my Ph.D., and he gave me an opportunity to begin my USC journey.”

He accepted a position as director of graduate regional studies at USC Aiken in 1982, then became the campus’s vice chancellor for student services. His wife, Allison, earned a nursing degree at USCA.

Seven years later, opportunity knocked again, this time as dean of USC Beaufort, which was then a regional campus with only one location.

“There isn’t a handbook for being a dean at a small institution like that. It felt sometimes like being thrown to the lions,” he said. But by the time he left in 1999 to join the university’s administration in Columbia, the Beaufort campus was well on its way toward achieving four-year status — and he was given a key to the city.

For the past 16 years, Plyler has tapped into his broad administrative knowledge of the university system, and his steady leadership has earned plenty of praise.

Philosophy professor John Catalano was a longtime dean of USC Lancaster and reported to Plyler for more than 11 years.

“I remember thinking on several occasions that he had the remarkable ability to keep calm and cool at times when few people could have done so,” Catalano said. “Along with that calm demeanor, he was remarkably patient in working toward a goal. I’m confident that without those attributes, Palmetto College would never have been realized.”

Plyler recruited Ann Carmichael into her current position as dean of USC Salkehatchie.

“When he discussed the position with me, it was clear that he had done his research; he knew my work and convinced me that I was a good fit for the position,” Carmichael said.

Former university provost Jerry Odom said Plyler never failed to be level-headed and even-tempered, even when others around him were losing their cool. “I always could count on him to be the rational person in whatever group of people were meeting,” Odom said.

Underneath that even-keeled demeanor lurked a sharp wit and a bit of lightheartedness, said Jane Brewer, associate dean for students services at USC Salkehatchie, who worked for Plyler more than 30 years ago at the Allendale campus.

“I was a student recruiter and he was assistant dean for student services at the time so he was my boss,” she said. “He was famous for being a practical joker. He would disguise his voice and call us looking for information. He did it so many times that when I got a call from a Donald Duck asking about his daughter attending Salk, I laughed hysterically and asked if his daughter’s name was Daisy.

“It turned out that Donald was real. His daughter, Elizabeth Duck, did come to Salk and was an excellent student.”

One of thousands who received an education at Carolina during Plyler’s long career.