5 questions for the maestro 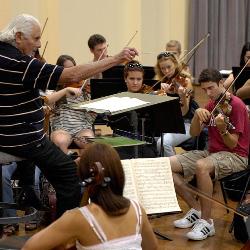 UofSC music professor Donald Portnoy will conduct nearly 400 of the university’s top performers and guests artists in a performance of the “Grand Messe des morts” by Hector Berlioz, a rarely performed masterwork at 7:30 p.m., April 21 at the Koger Center for the Arts.

For nearly 30 years Donald Portnoy has led the University of South Carolina Symphony Orchestra, guiding the aspirations of music students and, at the same time, enthralling audiences with passionate performances, oftentimes showcasing outstanding guest artists. He holds the Ira McKissick Endowed Chair for the Fine Arts and is the founder of the Conductors Institute of South Carolina, a summer training academy for top conducting students. For his outstanding achievement and contributions to the arts in South Carolina, Portnoy is a 2015 Elizabeth O’Neill Verner Governor’s Award for the Arts recipient, the state’s highest honor in the arts. Awards will be presented to Portnoy and six other winners later this spring. We caught up with him recently to talk about his career and life in music.

When did you know you were a musician?

"I started violin lessons at age 6. Like most children, I practiced because my parents made me practice. But as I grew in skills, I realized I really enjoyed playing. I also had very good teachers who pushed me. The more they demanded, the more I wanted to play. I sort of just knew that performing was my future."

You graduated from The Juilliard School and then immediately served in the military. Was that part of your career plan?

"Not really. Right before I graduated, I received a letter from Uncle Sam and was drafted. Fortunately, there was an opening in the Marine Corps Chamber Orchestra in Washington, D.C. As you can imagine there aren’t many violin positions in the military. I auditioned and was accepted. I spent my military career performing throughout the city, including the White House. It was a wonderful experience with steady pay."

You’ve conducted in nearly 20 countries, from Europe to South America to Asia. Is music truly the universal language?

"During my first trips to China and South Korea, I used a translator. There were so few English speakers back then. Now everyone speaks English. I only have trouble directing musicians to a particular point in the music. When we need to start at a specific measure, I’ll say the number or letter in the score, and a musician translates to the orchestra. But when it comes to actually playing there are no barriers. Music is international. The notes on the page are a common language that we all understand and appreciate. That’s been the case everywhere I’ve conducted."

Do you have a favorite composer?

"I get asked that question a lot. I was awarded Ditson’s Conducting Award because of my commitment to performing American music. It’s a pretty big deal. Other honorees include Robert Shaw, James Levine and Leonard Bernstein. I’m honored to be on that list. So it would appear that my favorite composers are American. But in truth, my favorite composer is the one whose music I’m about to perform. I immerse myself in the music. I study scores. I read the commentaries. I listen to recordings. So when it's time to conduct it, I feel that I fully understand the composer’s intentions, and he or she is my favorite. But the relationship is short, because I’m constantly looking at the music of the next performance."

Is conducting a science or an art?

"It’s both. The science is understanding music, technically. The art is in the interpretation of it. And great performance happens when the musicians convey my intentions with the same energy and passion in which I’m conducting. When that happens the audience leaves knowing they experienced something special."

Donald Portnoy will lead nearly 400 of the university’s top performers and guests artists in the a performance of the “Grand Messe des morts” by Hector Berlioz, a rarely performed work that requires a double orchestra, massive choir and a tenor soloist. Students from the School of Music’s top orchestra, band and choral ensembles will perform will join talents with guest vocalist Christian Šebek and the Coker College Singers. This is only the second time the “Berlioz Requiem” has been performed in Columbia since the university presented it in 1991.

This rare music event takes place on 7:30 p.m. on Tuesday, April 21 at the Koger Center for the Arts. Tickets are $30 general public; $25 senior citizens, USC faculty and staff; $8 students, are available at Capitol Tickets 803-251-2222, capitoltickets.com or Koger Box Office, corner of Greene and Park streets.

Learn how you can support programs at the UofSC School of Music by visiting Carolina's Promise.