A business built on sweat 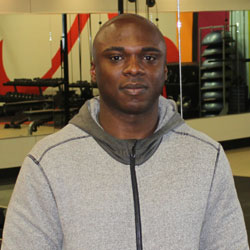 Jamie Scott says he doesn't keep track of how many hours he works every week. "I just wake up early and keep going until I get tired."

You could say that Jamie Scott has built his business on sweat — his own and his customers’.

But there’s a lot more to Jamie Scott Fitness than perspiration, and that’s why the former Gamecock football player has been so successful in the first two-and-a-half years since opening his boutique-style gym in Columbia.

“I have the best job in America. I get to stay fit and change people’s lives by improving their physical and mental quality of life,” says Scott, who earned a bachelor’s in retailing from the College of Hospitality, Retail and Sport Management in 2001. The college this week named Scott the 2015 HRSM Young Alumni Award recipient as part of HRSM Week.

Scott played football at Carolina until 2001 when he graduated and transferred to S.C. State University for a fifth year of student-athlete eligibility. He earned a master’s degree in counseling education there and has been a nutrition counselor and strength coach at Hammond Schools in Columbia.

Launching his fitness studio involved drawing on everything Scott learned in college along with contacts he made in sports, at Hammond Schools and from several business mentors.

“I’ve gone through the first phase of entrepreneurship — I know I can do this and that it’s profitable. Now I have to figure out how I want to spend my time, and my goal is to own the largest privately owned fitness studios in the Southeast,” Scott says.

To that end, Scott is always on the lookout for new trends in the fitness business. He regularly tours fitness studios in large-market U.S. cities and plans to visit similar gyms in Europe later this year.

“I’m not interested in fads. I want to introduce fitness ideas to my clients that they are going to stay interested in,” he says.

One of those is SWEAT, an indoor cycling studio that involves a full-body workout. Scott opened the first one in Columbia and plans to open another in Charlotte, N.C., soon.

He also pays attention to the basics — cultivating happy employees, community involvement and positive customer experience. His studio, located behind Whole Foods on Cross Hill Road, offers about 50 workout classes every week with more than 40 instructors.

“We see people come in with bad numbers — cholesterol, blood pressure — and watch those improve as they work out,” Scott says. “It’s hard to lift weights or work out regularly with good coaching and not get results.”

Scott attributes his business success to the skills he learned as a football player and what he learned academically, from retailing to counseling.

“I had a lot of good times at Carolina; my whole experience was good, from football to the classroom,” he says.