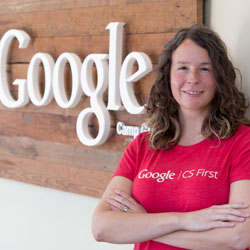 JamieSue Goodman, Google's project lead for CS First, wants to get fourth- through eighth-graders interested in computer science — and the many career options available for those with programming skills.

Blakely Hoffman remembers telling a friend in her freshman dorm that she wished she had known about computer science in elementary school.

Hoffman, a computer science sophomore at the University of South Carolina, didn’t take her first computer science course until high school and figured she would be much further along now if she had started sooner. That conversation led to an idea to start a computer club for disadvantaged children in Columbia, “but I didn’t know anything about writing a curriculum for kids,” she says, “so I got on Facebook and someone asked if I had heard of CS First.”

CS First, created by a Google team in South Carolina, is a curriculum geared for children in grades 4 through 8 that’s organized around themes such as art or game design and includes easy-to-use programming software called Scratch.

JameSue Goodman, the project lead, is a 1997 Carolina grad who took her first computer science course in her last semester of college. She finished with a degree in English but a passion for computer programming, a skill she taught herself after graduation. When the company she was working for was acquired by Google in 2011, Goodman transferred to Google’s data center in Berkeley County, S.C., to become the CS First project lead.

The first clubs started in Charleston in July 2013, and now there are more than 27,000 children in volunteer-led CS First clubs in the U.S. and 16 countries with 2,000 more students signing up every month.

That’s how Hoffman got started as a volunteer with other UofSC students, leading a CS First club that meets after school at Brennen Elementary. More than 1,000 children are in other CS First clubs in the Columbia area.

“They’re learning the basics of programming faster than I learned it. The first couple of weeks were a steep curve — there was a lot of ‘Why are we learning this?’ — but then they started making cool stuff and they were hooked,” Hoffman says.

Google got behind the CS First project for very basic reasons, Goodman says. There’s a consensus that the IT industry needs more women and minorities and that there could be a million more programming jobs than qualified people to fill them if current computer science enrollment trends continue.

“If you know how to code, you can get a job,” Hoffman says. “So this could really help to end the poverty cycle for some of the kids in our club. To know that I might be giving them an opportunity that I didn’t have at the same age is rewarding.

“At the very least, we’re showing them that the stereotype of computer science as being really hard or really boring isn’t true.”

CS First clubs could also be a boon to children in rural areas like Manning, S.C., where Goodman grew up.

“I still own a house in Manning, and I love the rural lifestyle, but people just don’t have opportunities in those small towns,” Goodman says. “But if you know how to program, you can be a remote employee. I’ve had meetings with people in Zurich, Beijing and Mountain View while I was on my porch in Manning. For me, personally, it’s about bringing great education to rural South Carolina.”

Check out more on Google's CS First program, learn how to volunteer and watch some CS First videos.