Portrait of a leader 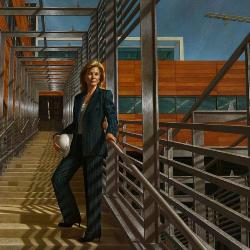 A building as a backdrop

The grand scale of Darla Moore's portrait — 8 feet wide and 14 feet tall — has an even grander backdrop: the new building that houses the school named for the university alumna and benefactress.

Australian-born portrait painter Ralph Heimans thinks of his work as visual biography, his canvasses capturing not merely the likeness of the subjects but also something vital about their personae.

The background for his 2012 diamond jubilee portrait of Queen Elizabeth II is Westminster Abbey with the queen standing in the same spot where her coronation took place 60 years earlier. When he began considering a setting for a portrait of University of South Carolina alumna and benefactress Darla Moore, Heimans and Moore both looked to the new building for the business school that bears her name.

“I had worked with the architect to get a sense of the space, but it wasn’t until Darla and I saw the building together while it was under construction that we saw a real potential for the portrait,” says Heimans, whose portrait of Moore was officially unveiled March 20 at the Darla Moore School of Business.

The massive portrait — 8 feet high and 14 feet wide — depicts Moore standing on the building’s central staircase, hard hat in hand, while the building was under construction in April 2014. Moore’s $45 million gift to the university (the second of two gifts totaling $70 million) was the catalyst for constructing the new facility for the business school. She also made a $5 million gift to establish the Ronald E. McNair Center for Aerospace Innovation and Research.

“Settings play a large role in my portraits, and the building is a powerful metaphor for Darla’s vivaciousness and spirit,” Heimans says. “It says something about her as a builder of people’s futures and about her legacy to the university and to the state of South Carolina.

“I like to think that the painting invites viewers to climb the stairs and join her in looking out over the building.”

Heimans’ portraits are usually quite large, but the Moore portrait is the biggest he has ever created. Lots of photographs and pencil drawings — along with scaffolding to reach every part of the canvas — were needed to pull it off.

Heimans spent eight months on the painting, meticulously following the 17th century Dutch masters’ technique of multiple glazings to achieve the play of light and color that is characteristic of works by such artists as Rembrandt and Vermeer.

Moore’s expression in the portrait is suggestive of “strength, composure, vision and perhaps a touch of humor,” Heimans says. “It’s very nuanced. I like to keep it open to interpretation.”

The portrait is framed with wood milled from the trunk of a 150-year-old live oak tree that was removed from the Horseshoe after being struck by lightning.

Moore is the first woman in America for whom a business school is named. Until 2012, she was vice president of Rainwater Inc., a private investment company, and she is also founder and chair of the Palmetto Institute, a nonprofit think tank aimed at bolstering per capita income in South Carolina.

She has served on numerous corporate and philanthropic boards, including the University of South Carolina Board of Trustees. She was formerly a managing director of the predecessor Chemical Bank and currently serves on the Culture Shed Board.

Heimans has been commissioned for portraits around the world, and his works hang in top galleries and collections in Australia and Europe.