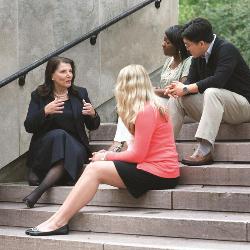 Longtime College of Arts and Sciences Dean Mary Anne Fitzpatrick has been tapped to participate in a panel discussion about the role the humanities play in public life as part of the National Humanities Alliance’s Advocacy Day. Fitzpatrick, a psychologist who spent her early research career writing about the complex dynamics of family systems, will be taking on a new role at the University of South Carolina as vice president for system planning for the university’s eight campuses. She talked with us recently about the vital role the humanities play in a range of disciplines and why it is important to keep teaching these disciplines to college students.

Why do you think the liberal arts are ‘under siege’ now?

“From the beginning of American higher education, there was a tension between the orators and the philosophers, with the philosophers saying ‘knowledge for the sake of knowledge’ – that it isn’t about the transfer of knowledge, it’s about writing and thinking in a very rigorous way. The orators were about how to make knowledge useful. This is a tension in American higher education that stems back from the earliest days with the formation of our liberal arts colleges. And now we see it coming forward again in a very strong way.”

Is it simply a cyclical concern that crops up every so often in discussions about higher education or is there something new driving today’s discussion?

“There seems to be a tremendous move toward a practicality and instrumentality lately and it’s certainly reasonable. The public, parents and students themselves worry about their return on investment, their major investment. One of the problems is that so much of the national conversation is based on a false understanding of what the data says. The prototypical image is the English major who graduates with $100,000 worth of debt and they can’t find a job and they’re back on Mom and Dad’s sofa. That’s the image that you have, but actually what you see long term is the real problem we have in higher education is when kids amass debt and don’t graduate, they don’t get a college degree.”

So what is the value of a liberal arts degree?

“There is a fundamental difference between educating students for that very first job where they fit nicely into that very first job and really doing a much broader educational background for students in which they learn to learn. A college of arts and sciences committed to basic science, basic research, core humanities disciplines, is really about training students for their third job and not necessarily their first job. We’re really about having students learn to think deeply, to read text very critically, to be able to write, to be able to develop a strong ability to reason quantitatively, to think about science and the role of science in human progress and also in ethical ways – about the ethical implications of some of our discoveries – and that’s sort of core to who we are as a college.

“The young chemists coming out don’t necessarily automatically get a job with a bachelor’s in chemistry, but they’ve really proven that they can master complex information. Very often, they have worked in a lab; they’ve worked in teams; they have been able to develop really strong quantitative skills. These are all valuable assets for moving the individual forward and moving the country forward as well.”

The new chairman of the National Endowment for the Humanities, who asked you to speak on this panel, talks about the humanities and ‘the public good.’ Can you explain what he means by that?

“The public good is an interesting thing. I am a psychologist, so I am not a humanities scholar. But I represent a very strong humanities faculty here at Carolina. The great thinkers, the leaders, in the humanities and leaders in the military and leaders in government and leaders in industry have come together to talk about the value of the humanities. In 2013, the American Academy of Arts and Sciences – the society founded by Benjamin Franklin to recognize the greatest work done across the disciplines – commissioned a study to explain the value of the humanities. This study, titled ‘The Heart of the Matter,’ pulled together a really elite group of individuals who talked about the inherent value of what we do in the humanities. We need to understand other cultures; we must understand our own history; we have to grasp languages and ways of knowing and thinking that other people have. Our national security depends on this, the future of this nation depends on this in a way that it hasn’t before.

“There’s been an explosion of kids majoring in religion after 9/11. No one predicted that outcome. And given international economic trends, the number of students majoring in Chinese has increased dramatically during the past five years.

“The really serious folks – not just in the humanities – but those who think deeply about the future of the country are really very dedicated to supporting the humanities, but they are dedicated much like our new national endowment for the humanities leader to trying to have some of the scholars really talk about the big questions, answer the big questions. I cannot say that every humanities scholar thinks it’s a great idea. That’s kind of the interesting thing about this. Talking about your life’s work in terms of its instrumental value is not something that is immediately acceptable to a lot of my colleagues.

“The new chairman of the National Endowment for the Humanities, William Adams, is calling on us to bring humanities and humanities scholarship into the forefront of current discussions of American life. We need to engage with the complex issues playing out in our public lives — the grand challenges as it were.”

What does this sort of thinking mean for scholars?

“I think it is calling for humanities scholars to write more for the public, to be able to justify what they’re doing more for the public and perhaps to go back to framing their work in terms of a big question. Sometimes what we educate people on is to focus on in-depth on a more narrow piece of that big question. Do a lot of highly specialized studies before you can actually make the big pronouncement. I think that is part of the struggle and it’s part of what the new humanities chairman is calling for.

“There was a moment when you did not have to explain to the public why history was important. You didn’t have to explain to the public why having an expert in Chinese history was vitally important. Well, one ‘explanation’ beyond the concept of we should know history is that when any Chinese leader speaks today, they’re constantly making references to things that happened in Chinese history thousands of years ago. These are references that resonate with educated Chinese people and we don’t have a sense, even after things are translated, what they’re talking about. Their sense of history is far longer than ours.

“There are thousands of examples like that of why it might be important to have this scholarly expertise represented in our American research universities.”