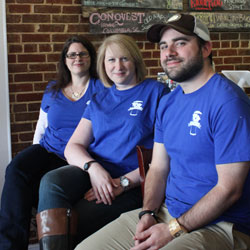 No need to read the tea leaves. Read the suds: Columbia’s craft beer scene is coming to a head — thanks, in part, to a handful of University of South Carolina alumni and staff members who want to share their love for all things beer with the larger community.

The inaugural Soda City Suds Week, which runs from March 21 through March 28 at locations throughout Richland and Lexington counties, was the brainchild of the Midlands Craft Beer Supporters, a registered nonprofit dedicated to promoting the area’s beer culture. The week will feature tastings, beer dinners, brewing demonstrations and other beer-related events aimed at connoisseurs and newbies alike.

And the timing, he says, is ideal. Since 2013, when legislation was passed allowing breweries in S.C. to serve up to 48 ounces of beer per customer in a 24-hour period, breweries have become one of the hottest startups in the Palmetto State. Three production breweries have opened in Columbia in just two years. Meanwhile, local beverage retailers and bars have also hopped up their offerings in recent years, generating even more buzz.

“The fact that we went from zero craft breweries in Columbia just a couple years ago to three says a lot,” McCormac says. “And there’s at least one more in the works — (longtime brewpub) Hunter-Gatherer plans to open a brewery. There are also breweries in cities like Lancaster and Florence now. It’s the whole ‘rising tide lifts all ships’ idea.”

After soliciting advice from organizers of similar events in Charleston and Greenville, McCormac and Midlands Crafter Beer Supporters board president Ashley Bower enlisted a few local hopheads, including Nick’s wife Whitney McCormac (’10 public relations) and April Blake (’08 public relations), each of whom who brought her own particular expertise to the project.

“I work in the university’s Office of Special Events, so I understand something about how to plan things like this, how to pull all of the right people together to make things happen,” says Whitney McCormac. “This is not something that the six people on our board could have done without the support of the businesses. All of the events are their events. We’re here to help them.”

Blake, who works in the university’s Office of Communications and Marketing and as a local food writer, coordinates the event’s media coverage. “Like Whitney, I’m parlaying the skills from my day job into this,” she says. “And I was already writing about food, so it was a natural fit.”

Soda City Suds Week is likewise a natural fit for beer enthusiasts who want to share a few pints. In the process, organizers hope newcomers to the world of craft beer will learn more about a growing industry that’s having a real impact at the local and regional level.

"I've made so many friends through sharing bottles and talking about beer," says Nick McCormac, whose blog Drink. Blog. Repeat. serves as a clearinghouse for brewery and beer news from around the state. "The local beer scene is just a really friendly, open community that's a lot of fun to be a part of."