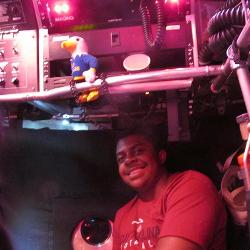 Senior Avery Lee had the opportunity to dive more than a mile-and-a-half below the ocean's surface in the Alvin submersible as part of a research cruise with adviser Scott White (check out the feature story).

Avery Lee was far from home, some 1000 miles off Central America’s Pacific coastline, descending into pitch-black waters. The Alvin submersible was noisy as it dropped into the abyss, creaking and popping as it dropped more than a mile and a half below the sea’s surface.

The DSV’s periodic rumbling didn’t bother Lee, though. The senior geology and marine science major understood that water pressure 2,500 meters below sea level was enough to deform the hull of the Alvin, shrinking its diameter about an inch in the hour-and-a-half it took to get to depth.

Even high-strength titanium will groan under that load, and knowing so kept the pressure off Lee, who was able to concentrate on more important matters — namely, documenting his observations of a seafloor never before visited by humans.

He had no idea what to expect, but once the landscape came into view, the natural structures he had seen in books, photos and videos appeared just a few meters from the porthole. Ropy rock from sheet-flow lava. Pillow basalt. A crater from a lava collapse. He wasn’t sure before arriving if they would see sediment or not, but it turned out to be abundant. And some of it was moving.

With a quick double take, Lee realized that the ambulatory sediment was actually one of the creatures content to live in the near-freezing waters of the deep sea. And he saw plenty more.

“There were sea stars, crabs, purplish sea cucumbers off in the distance,” he says. “Some very slow-moving fish, an octopus perched out in the open. What really capped it off for me was seeing polychaete worms swimming through the water.”

One sight he didn’t see was a hydrothermal chimney, a fixture in volcanically active areas of the East Pacific Rise. Black smokers, white smokers and other forms of deep-sea vents fascinate Lee and drove him to study ocean and earth sciences.

In four-and-a-half hours of bottom time, the three-man crew of Lee, mentor Scott White, and Alvin pilot Bruce Strickrott explored the seafloor terrain about three miles away from the ridge of the East Pacific Rise. They didn’t find any obvious hydrothermal vents, but data they collected gave them reason to think off-axis volcanism might be possible — perhaps to be uncovered on a future trip.

“I would definitely do it again,” Lee says. “It was everything I hoped for, and then some.”

This  story and an accompanying piece about the research senior Avery Lee and his adviser Scott White are working on (online here) appear in the April issue of the USC Times.