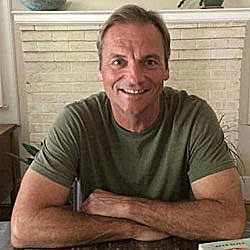 “I think it’s disingenuous if a writer, or any artist, says, ‘Oh, I don’t know what I’m doing, it just comes out of me,’ ” says David Bajo, the creative writing MFA director at Carolina who is speaking at Open Book on April 8.

David Bajo has attended every Open Book event since the popular literary series began in 2012. He’s sat in the audience at the University of South Carolina’s Ernest F. Hollings Special Collections Library while marquee writers like Ian McEwan, David Mitchell and Jennifer Egan discussed their work. He’s picked up authors from the airport and taken them to dinner. He’s contemplated their opinions on artistry and craft.

Now, as part of the Open Book’s 2015 lineup, the novelist and creative writing MFA director will take the other side of the lectern.

“I’m in either an intimidating or an enviable position because I’ve seen this very intimidating list of authors,” Bajo says with a modest chuckle. “I can’t talk about revision at the level that George Saunders did two weeks ago. That was just astounding. I took notes.”

Saunders kicked off this year’s five-week series March 18 before a packed house. For the unfamiliar, he has won both a Guggenheim and a MacArthur Fellowship, been inducted into the American Academy of Arts and Letters and named one of the world’s 100 most influential people by Time magazine.

Bajo’s latest novel, “Mercy 6,” is a literary take on a medical thriller set in a California hospital — “I tried to address the tropes of the genre and invert them rather than falling into them,” Bajo says — but that’s only one aspect of what Bajo intends to discuss.

“I want to talk about author intentionality, which is something of a dirty word in scholarship,” he says. “I’m in the English department surrounded by all these fantastic scholars, and if I speak of intentionality, they’ll just smile politely. And I know this.”

Polite smiles or not, it’s something Bajo has given serious thought. It comes up in the writing workshops he leads and in conversations with fellow writers, each of whom has his or her own take on the authorial craft. Bajo is no exception.

“I think it’s disingenuous if a writer, or any artist, says, ‘Oh, I don’t know what I’m doing, it just comes out of me,’ ” he says. “No, whether we admit it or not, we have intentions. And we do things in our craft to get our intentions across.”

In fact, Bajo’s approach to writing fiction is decidedly intentional, as he tends to establish rules for himself at the outset of each project as a way of challenging himself. In the case of “Mercy 6,” that meant writing the entire novel without the use of similes — at least, outside of dialogue — and addressing the larger concept of metaphor directly through the thoughts and actions of his characters.

“I’m interested in metaphor’s role in contemporary literature,” Bajo explains. “It has a dominant role, and I think writers — lyrical writers, especially — are rewarded for their metaphorical dexterity. And you know, there’s something to that. But some writers use it too much, and without discretion.”

He’s reluctant to name names, but not to draw comparison. In a preview of his Open Book talk, he uses a metaphor to talk about the danger of metaphorical excess — and yes, he’s aware of that irony.

“It’s like if Baryshnikov were to give a performance but all he did was perform these amazing leaps,” he says. “You would like it the first two or three times, and then after that it becomes a nonperformance.”